Evil In Its Many Forms

Below are reviews of three markedly different films. One is an animated joy, one a genuinely creepy horror, and one is just plain crap. But all three of them have one associated factor: the presence of e-e-e-evil. Read on if you dare, CR@B fans... *cue devilish laugh* 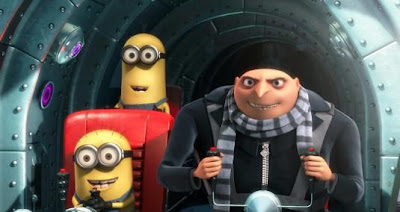 I have such a soft spot for CGI ‘toons of the Pixar and Dreamworks ilk; so bright and entertaining are they, yet concurrently clever at appealing to everyone. They’re easy viewing without being brainless pap, and I really appreciate their wit and the relatable emotional core which lurks beneath the surface.

Speaking of things lurking beneath the surface (check me and my seamless segues), welcome to the underground HQ of dastardly supervillian Gru (Steve Carell, adopting a cod-Russian accent), who – with the help of an army of Oompa Lumpa-like minions and the technological expertise of maaaaad scientist Dr Nefario (Russell Brand) – is planning his most diabolically devious deed to date: to steal the moon.

But while the authorities are powerless to stop his wickedness and rival supervillians (such as the Jason Segel-voiced Vector) are outwitted by his treachery, Gru is about to be outfoxed by his biggest challenge to date: three cute little orphans by the names of Margo (Cosgrove), Edith (Gaier) and Agnes (Fisher). Aaaaaah.

The juxtaposition between hook-nosed Gru’s lair of macabre ornamentation, dead lawns and m

ultifaceted weaponry and the girl’s innocent lives of pillow fights, fun fairs and ballet recitals is hilarious, while watching Gru’s blackened and lifeless heart slowly resuscitated by the girl’s verve for live is adorably sweet. Who needs the moon when you’ve got three stars at home?

Despicable Me is just further proof that pixelated features are legitimately engaging experiences with the range and depth to pack adventure, fantasy, giggles and heart into their bright, polished forms, and they can be enjoyed by all, irrespective of age or level of supervilliany. 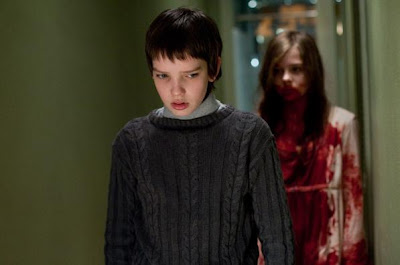 Such a hard film to review this one, because it indisputably is a mature and accomplished slow burn horror – I can’t fault it on a technical level – and the casting of Kick Ass’s “Hit Girl” Chloe Grace Moretz and The Road’s Kodi Smit-McPhee as two very different social outcasts who find strength in friendship, is perfect, but – and it’s a but of moon-eclipsing magnitude – Let Me In is so comparable to the Swedish original (Let the Right One In, itself only two years old) that its existence is completely futile.

Adapted and directed by Matt Cloverfield Reeves, this English language remake – despite moving the action from a desolate Swedish village to New Mexico – stays so close to John Ajvide Lindqvist’s source novel and original screenplay that it’s sometimes hard to tell the difference – even the sets look like they’ve been recycled! A big effort has been made to deliver an ‘80s atmosphere through the playing of popular music, but to such an over-exerted degree that its inclusion feels forced and false.

Reeves doesn’t take the creepy reveal of forever-pre-teen vampire Abby’s (Moretz) gender-less form to quite the same level of discomfort as Ajvide, but still the script feels the need to retain – repeatedly – the “Would you like me if I wasn’t a girl?” probing, which loses much of its potency when you know it isn’t leading to the almighty shock the 2008 film delivered. 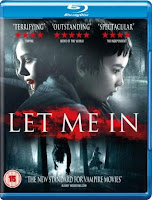 Watched independently, I am certain I would be raving about Let Me In as a morbid yet refreshingly original take on the diluted vampire genre, but having already watched the original production, I know all too well that – as good a film as this undoubtedly is – it isn’t really down to Reeves’s writing or directing talent; the template was already in place. It’s the same argument that raged around [REC] and Quarantine, and Hollywood still haven’t learnt that we can read subtitles, as David Fincher’s Dragon Tattoo remake rears ever closer to its year-end unleashing, just 24 months after the Swedish version received international acclaim… 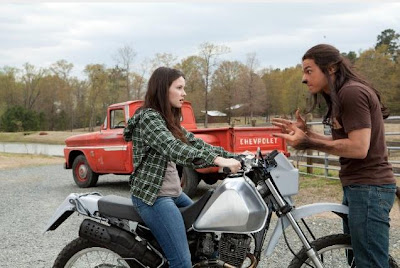 For the record: vampires do not suck, but this film definitely does. It's the latest disaster-piece from Jason Friedberg and Aaron Seltzer, two of the six writers who drained the spoof genre dry with the Scary Movie foursome before lampooning any other popular target with evermore puerile and lazy “gag” strewn idiocracy. Vampires Suck, however, is – if possible – a new low.

To call it a spoof of vampire-themed entertainment is rather deceptive: True Blood, The Vampire Diaries and Buffy the Vampire Slayer get all of two seconds recognition, as does cultural icon Lady GaGa, before the writers revert back to their predictable Twilight comfort zone: Jacob (Chris Riggi) producing his contract to clarify he must be topless every ten minutes, Becca being an awkw 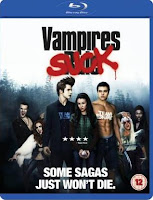 ard and frigid newcomer (a trait which, I succeed, Proske nails perfectly), fans warring over which “Team” is best – it’s all been recognised before in much funnier and more dynamic ways.

At least the tagline – “Some Sagas Just Won’t Die” – acknowledges the scale of vitriol levelled at these vacuous wastes of time, but as long as they continue to send-up the trendiest targets, they know they’ll always attract an audience – regardless of what that audience says about the film after they’ve paid their money…