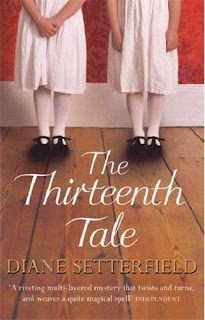 Devouring this novel’s last 250 pages in one mammoth session is probably the fastest I have ever read a book. Faster even than I read The Book Thief or The Girl with the Dagon Tattoo, two works I couldn’t consume fast enough and would unquestionably ordain as modern classics. I cannot proclaim quite the same level of adulation for debut author Diane Setterfield’s fragmented and revelatory gothic mystery, but I had a book club deadline to keep to and was determined to make it.

Of course any novel which holds your attention for that length of uninterrupted time must be doing something right; I was certainly never bored by the valiant tale-within-a-tale structure, with Setterfield building suspense by drip-feeding the story through a strict authorial narrator. The Thirteenth Tale introduces us to bookish amateur biographer Margaret Lea, hired by reclusive and secretive author Vida Winter to write a biography of the novelist’s extraordinary upbringing.

The novel drifts between Miss Winter’s vivid recounting of her family’s past and modern-day research Margaret undertakes to determine whether her storytelling interviewee is actually – finally – telling the truth, or merely spinning her scribe another yarn. The gravely ill Miss Winter has handpicked Margaret for a particular reason, and soon the author’s tale is impacting and intertwining with Margaret’s present.

Miss Winter’s storytelling expertise lends a masterful gloss to her history lesson. She knows when to end each session to tease a future plotline. You find yourself determined to read on to uncover every last detail of her story. But the fact that it is her story is the concept around which the entire novel wobbles: Margaret reacts to what she hears, guiding our reactions, and were Miss Winter more open with Margaret, the skill of the exposure would be lost and the truth too plainly – and painfully – laid bare. Vida Winter understands this because Setterfield understands this, which is why there is a beginning, middle and end to all good stories, even true ones.

This guiding of our reactions is laid on a little thick with a few too many nods and winks towards “ghosts”, “mists”, “twins” and classic novels with analogous themes – it is an attempt to endow the everyday with a supernatural quality which is hardly necessary given the complexity of the plot. We, the reader, can already ascertain that something is amiss (the fact that Vida has countless times previous told reporters a pack of lies about her past; her reluctance to say “I” when referring to herself; etcetera), so any further efforts to mystify the mysterious are completely superfluous.

Given the span of time covered by Miss Winter’s life story, there are a depressing number of deaths and disappearances in and around the catalytic Angelfield/March homestead (March being Vida’s christened name). Nobody is introduced who doesn’t have an impact upon the story, so their spirits may linger long after their corporeal shell expires, but the shadow of death does lend the novel a cheerless and morbid edge when practically every character you are introduced to grows old, loses their mind and dies – in astonishingly swift succession.

On the subject of death, Margaret’s deceased twin – a source of much uneasiness between herself and her selfish, absent mother – feels like an unnecessary addition. Sure, it gives Miss Winter – herself a twin – a connection with her “amputee” (as Margaret refers to herself; incomplete since losing her other “half”) transcriber, but it feels bolted on and never really embeds itself completely into the narrative, standing on the periphery until a flimsy and implausible post-script resolution undermines the previous 450 pages in a page and a half.

The same can also be said about the mystery surrounding the title: The Thirteenth Tale – a missing story from one of Vida Winter’s most popular publications which randomly gets mentioned throughout the modern day passages as a way of justifying the novel’s title. It enforces an importance on what would otherwise be little more than a fleeting query, so you expect its exposure to be monumental. When, many years later, Margaret finally reads the lost tale, its autobiographical nature seems to be the only reason for its omission, which is something of an anticlimax; all of the juicy revelations exposed many chapters prior.


In a CR@B Shell: Never stagnant, The Thirteenth Tale is easy to read but hard to love, given the austere and transitory nature of its ever-changing cast. But Setterfield certainly knows how to hook you in by tantalising many clues and half-truths throughout Vida Winter’s florid account of life as a twin, making for a curious and absorbing gothic unravelling.
aaaaa
Created by ~ CR@B Howard ~ at 13:49