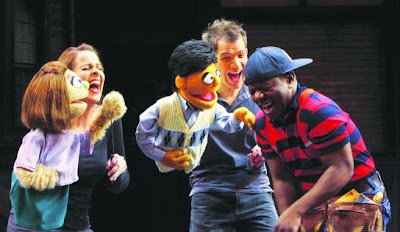 Remember how hilarious it was hunting down the infamous lost “adult” episode of Rainbow when you were younger and sniggering at the usually joyous and innocent George, Zippy and Bungle acting like smutty, foul-mouthed goons? Well now you don’t have to – because Avenue Q delivers exactly the same culture clash in an adults-only musical stage show extravaganza! 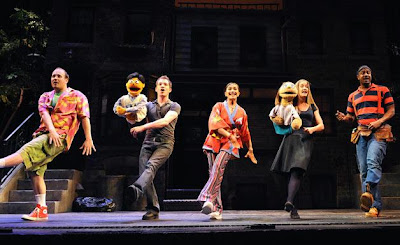 Most disconcerting for me was Avenue Q’s go-to handyman Gary Coleman (Matthew J. Henry). Yes, that Gary Coleman. A fictionalised representation of a genuine celebrity lampooning his fall from grace since his status as a child star faded. I wasn’t aware before the show, but I was fairly certain that the real Gary Coleman did not have a hand in writing the script (he did not), so I couldn’t quite work out why he was there; it didn’t really fit with the rest of the production. Considering the Diff’rent Strokes star died just last year, it was also uncomfortable sniggering at him, even if it is a sardonic exaggeration. 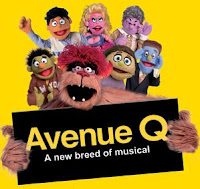 Kudos to the hard-working puppeteers who sing, act and emote via their hand-held characters fantastically. But given their visibility it does irk when puppets are traded to substitute performers while the puppeteers portray multiple characters – even if they do still throw their voices to retain continuity. Video screens intermittently slid down to screen childishly animated skits; they garner a minor chuckle but are ultimately unnecessary, as was an uncomfortable descent into the audience to coerce viewers into “raising funds” for lead female Kate Monster’s (Rachel Jerram) dream school.