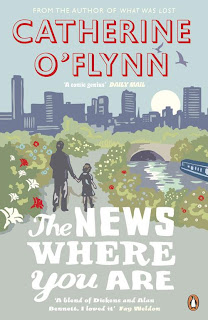 Never judge a book by its cover; perhaps the most well known piece of advice, and yet one which I never fail to ignore. Looking at the bright colours and twee portrait of a man and his daughter walking hand-in-hand through a blossoming park as a city spreads out in the distance, I was convinced The News Where You Are would be a light-hearted novel from an “awesomely talented” (so writes Tatler) “comic genius” (Daily Mail) I would enjoy. Indeed, Scotland on Sunday was positively gushing in their grab line:

“Seriously uplifting, hilarious. A funny, moving, acutely observed story about
family and loss. A pleasurable, satisfying gem of a novel”

Of course I’m not so easily swayed that I didn’t read the synopsis, too. The quirky blurb – outlining how a pun-machine of a regional TV news presenter becomes something of an amateur detective, investigating the mysterious hit-and-run death of his predecessor – reminded me of Mark Haddon’s A Spot of Bother (in tone more than plot, I must elucidate). A funny and moving study of mortality, family and friendship? I’m in!

O’Flynn’s prose is enrapturing in its precision, her dialogue free-flowing and naturalistic, but what quickly struck me about her sophomore release was how achingly depressing it is. Granted, there are flashes of comedy, particularly from protagonist Frank’s eight year old daughter Mo, but her aside every other character is so weighed down by melancholy worries that you wonder how any of the applauding publications could focus so narrow-mindedly on the “laugh-out-loud satire” (Independent on Sunday).

Frank’s aforementioned predecessor, Phil – his story gradually unfolded through intermittent flashbacks prior to his death – is a celebrity who is adored by his public and promoted to nationwide entertainments shows, but he is so consumed with vanity and his public appearance that he never seemed happy with his lot. Phil’s lifelong best friend, Michael Church, a lonely near-hermitised old man who fell out of contact with the local celeb for many years, has also recently passed, and Frank is saddened by the lack of fanfare for this passing life.

Closer to home, Frank’s female co-host is apathetic to the frivolous nature of their show, “Heart of England Reports”, while Frank’s mother is lonely and bitter and refuses to acknowledge any hint of joy to her loyal son, even when a care home friendship with a man called Walter flourishes, while Frank and his wife Andrea spend time educating Mo in the quickly disappearing legacy of Frank’s deceased architect father, who’s creations are being knocked down faster than anyone had hoped. 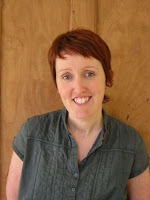 O’Flynn’s short, sharp chapters feel so contained that it is over halfway through the novel that the various character strands start to feel like they are leading somewhere climatic. Car journeys to destinations we never progress to and walks down corridors to rooms we never enter form fleeting venues for discussion but can’t disguise a random sensation when the following chapter jumps to another location, character or even year entirely.

For all of my criticisms, the book’s gloomy outlook does lend the motivating murder/mystery element an insightful and reflective edge. Should we mourn loss and fear progression or should we become obsessed with leaving a concrete mark of our existence? Does it matter? Will we be missed? However, such profound questions obscure any wit in a sentimental mist, leaving a bittersweet feeling which doesn’t prohibit me appreciating the prose, but does hinder me taking pleasure from it.


In a CR@B Shell: An acutely written polemic on existence with a host of well-rounded folks all contributing to the melancholic discussion, but O’Flynn’s satire will leave you unsure whether to laugh or cry. The News Where You Are simply wasn’t the “uplifting, hilarious” book I was lead to expect.
aaaaa
Created by ~ CR@B Howard ~ at 03:00