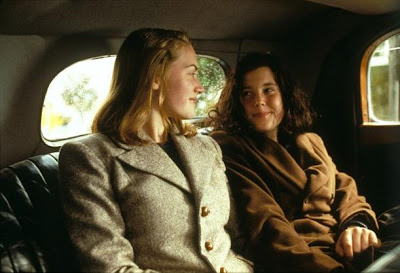 Some background context for y’all: Some weeks ago I suggested the novel Bedford Square to an acquaintance. I had not read any of Anne Perry’s vast back catalogue of fiction before, but I know she is an incredibly popular author in the Victorian murder mystery genre. My acquaintance replied incontrovertibly that she would never read a word written by that author, because Anne Perry is a convicted murderer. I was dumbfounded to say the least, it was certainly the first I had heard of this revelation, but I was interested to find out more and set about researching Ms. Perry’s dark past.

My research led me to discover all about the horrifying real events which took place in New Zealand in the mid 1950s, in which the then school girl (born Juliet Hulme, Anne Perry being a pseudonym) conspired with her best friend, Pauline Parker, to murder Parker’s mother in a delusional attempt to stop the girl’s parent’s from keeping the friend’s apart.

Had the girl’s been but a few years older, they would have received the death penalty, but instead they served a sentence in prison and have subsequently been released – under the condition that they never communicate with one another again – with Hulme moving to Scotland and becoming famous for a completely unrelated reason: her talent as a writer.

When I found out that Peter Lord of the Rings Jackson’s 1994 film Heavenly Creatures was based on the controversial crime which shocked NZ, I was desperate to search it out, but even the 2004 region 2 DVD release has been deleted. Having asked about in ex-rental stores with no joy, I indulged my curiosity after (re-)purchasing a multi-region player and picked up a US copy for a bargainous price.

Based upon details made public during the court case and Parker’s diary entries, Heavenly Creatures proves to be disturbing viewing: Melanie Lynskey excels as the shy Parker, while Kate Winslet radiates confidence to the point of purposeful irritation as the prim yet outspoken Hulme. It’s the kind of shocking story which lends credence to the maxim “truth is stranger than fiction”, as the two best friend’s form a quick-but-concrete bond which sees them go off into their own fantasy worlds where they take on the characteristics of characters from medieval love stories they create.

A major departure in both style and tone from his “splatter” films such as Bad Taste and Braindead, Heavenly Creatures retains some of the amateurish qualities of the director’s early films, while also paving the way for his later, more accomplished blockbusters. Indeed, the film's ahead-of-their-time CGI effects – such as morphing landscapes, giant butterflies and animated pottery figures have definite shades of the limbo stage featured in Jackson ’s 2006 The Lovely Bones adaptation.

Jackson and co-writer Walsh seem to point the finger of blame at many a factor – the starkly contrasting reactions (and parenting styles) of the girl’s parents to their close-knit friendship, the breakdown of the Hulme’s marriage and Hilda Hulme’s (Kent) affair, Juliet’s reoccurring ill health, Pauline’s sexual experiences with an older man (Brophy) – the list could go on, and it makes for an intriguing spider web of cause and effect. I frequently found myself cringing and shouting at the screen, demanding why these people were acting the way they were. But at the end of the day, any teenager who would even consider murdering their own mother (Peirse) so they could spend more time with a school friend has serious issues.

Had this taken place in today’s world, Hulme and Parker would undoubtedly have been sent for psychiatric examination long before their horrendously excessive plan is hatched. Their bizarre make-believe alter egos, their obsessive natures (both with one another and stars of the time), their belief in cultish quasi-religions and their extreme jealousy would all have prompted far faster and more efficient treatment. As it was, they were considered to be lesbians in an era where such behaviour was feared, and this societal distancing only brought the outcasts closer together.


In a CR@B Shell: Simultaneously engaging and disconcerting, Heavenly Creatures is an examination of doomed friendship and irrational behaviour which is only occasionally let down by the economical production. It showcases stars on the rise in Winslet and Jackson, but leaves an uneasy after-taste when you apprehend it all really happened.
aaaaa
Created by ~ CR@B Howard ~ at 04:43