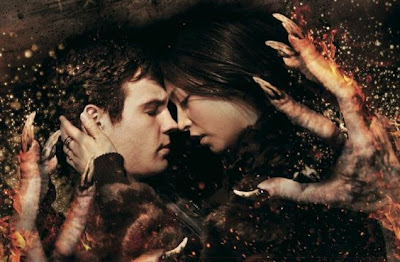 If the cast of Shameless ever delved into the occult, Outcast would be the outcome. A pair of Irish travellers – introverted teen Fergal (Bruton) and his protective mother Mary (Dickie) – find temporary lodging in a deprived council estate in Edinburgh . They are in hiding from the inexorable Cathal (Nesbitt), a man who uses black magic to hunt his quarry. Meanwhile, the lowlife deadbeats wasting away in the concrete jungle are picked off by a mysterious beast with a taste for flesh…

Dark, visceral and lacking any cinematic gloss, Outcast adds a smattering of gritty social realism to its fantastical predator and prey plot. The Edinburgh estate is in a state of disrepute; a grey wasteland of smashed windows, graffiti-ed walls and uncouth chavs - among them Karen "Amy Pond" Gillan in a pre-Who supporting role - who doss about on the swings while their parents drink themselves into an early grave. It’s an unpleasant sight, but it at least makes a change from seeing all the prettiest young starlets getting picked off in their lush New York skyscrapers. 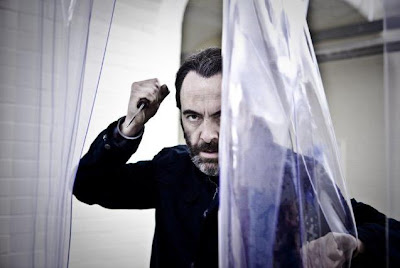 Much to his mother’s stern disapproval, emotionless Fergal starts an awkward romance with Petronella (Stanbridge), an independent girl from the estate with a sharp head on her shoulders. The pair have nothing in common and they seem to spend half their time together in awkward silence, but I can imagine these kind of desperate, chemistry-devoid unions take place all the time when there’s nothing better to do than hang at the park smoking.

Despite his star quality, Cold Feet’s Nesbitt delivers an unglamorous turn as the gruff and unlikeable Cathal, a mystically tattooed brute who snaps crows’ necks to work his wicca magic and locate Mary for a predictable climatic showdown which ties the film’s three key threads together: who is the monster, why is Cathal so intent on dispatching a woman long gone from his life, and what was the purpose of Mary keeping Fergal and Petronella apart?

The CGI beastie is often obscured in shadow (for budgetary reasons I’m sure), but when it does eventually grace the film in all its hideous supernatural glory, it looks like a long snouted, green-skinned werewolf. It’s too lanky to be particularly scary, but it does its job without being laughed off the screen. Elsewhere, Outcast goes all out to achieve a top shelf rating, splattering the pavement in as much gore as possible and even subjecting the game Dickie and Bruton to gratuitous nude shots. Blimey - these people really are Shameless!


In a CR@B Shell: Rough around the edges and not at all pretty, but Outcast is a gritty and atmospheric low budget effort which deserves more than the one star mauling genre fanboys SFX subjected it to.
aaaaa
Created by ~ CR@B Howard ~ at 14:48