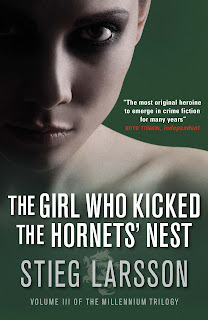 [SPOILERS] I think I’ll be forgiven for having not *quite* finished all 743 pages of Stieg Larsson’s trilogy-closing magnum opus when I saw the consummate Swedish film adaptation at the cinema last year (review HERE). As hungry as I was to consume every last word of the trial of Lisbeth Salander, The Girl Who Kicked the Hornets’ Nest was a mammoth struggle of a read. Which isn’t to say that it isn’t brilliant; it’s just in need of a damn ruthless edit: the frickin’ epilogue alone is over 30 pages!

My resolve kicked-in in the lead up to the film’s UK Blu-ray release on April 11th, and I set about finally getting to the end of this beast. Being familiar with the characters and the story helped tremendously, but I was nevertheless amazed at how quickly I took to (re-)immersing myself in the story, despite picking it up from page 230. It took me 8 further days, but I made it! And in celebration of this achievement (I’m making reading a book sound like conquering Everest, aren’t I?!) I present to you, dear CR@B fans, my review:

Kick starting at the cliffhanger we were left perilously perched over at the close of middle novel Played With Fire, Hornets’ Nest once again separates its two iconic leads – crusading journo Mikael Blomkvist and hospital-stricken social pariah Salander – for over ninety percent of the narrative, as Blomkvist sets about proving his rebellious and recuperating friend innocent of the astonishing list of wild accusations which have turned her into Sweden’s Enemy #1.

As the prosecution gathers together its fraudulent evidence in anticipation of Salander’s recovery from a bullet wound to the skull and the subsequent trial which they hope will see her once more institutionalised, light is shone on Säpo, the shady secret governmental inner circle which for years has silenced and victimised this brave, innocent little girl who knows the truth behind their corrupt cover-up of a harboured spy: Lisbeth’s wicked, wife-beating father Zalachenko.

As Säpo uses all manner of nefarious schemes to cover their tracks, Salander uses a smuggled Palm to corral her hacker pals, type her autobiography and fight her corner from her hospital bed. Ever determined, Blomkvist forms a co-operative alliance with a unit of investigators intent on uncovering the conspiracy, while his sister, Annita Giannini, perseveres with her awkward client in the name of justice, taking on the role of Salander’s defence lawyer.

If that wasn’t enough to keep track of, the regular police force is simultaneously making waves with their investigation into Säpo’s illegalities and Millennium’s editor-in-chief, Erica Berger, makes the difficult decision to leave the investigative magazine and work for newspaper SMP, only for a foul-mouthed stalker to make her instantly regret her decision. Oh, and don’t forget Lisbeth’s police-slaughtering fugitive half brother, Ronald Nierdman, too, who keeps to the fringes of the page but still has an impact come the conclusion.

Larsson’s comprehensive characterisation once again paints a scrupulously dynamic picture of his crowded cast. You quickly learn that they all drink far too much coffee and smoke far too many cigarettes. Salander is still as introverted and uncommunicative as ever, her strict principals often coming at the detriment of her appeal, while Blomkvist’s “free love” outlook does begin to grate as he sleeps his way around Sweden .

With a multitude of characters (each with a different agenda) circling the Zalachenko case, you do find that even as the narrative jumps from group-to-group, a lot of the back-story is repeated to the point of irritation as everyone collates, assesses and reassesses their knowledge of the facts at different speeds. And yet, conversely (and much to Larsson’s storytelling credit), it’s still inexplicably readable.

In a shorter work, Berger’s harassment sub-plot would have been a welcome respite from the focused endurance of the trial, but in a work this large it just feels like superfluous baggage. It’s not unenjoyable, it’s just Larsson seems to like alienating his heroes and seeing how they cope when it’s them versus the world. However, I completely concur with the filmmaker’s decision to tweak and ingratiate this distraction into the grand Säpo conspiracy in their adaptation.

I couldn’t help but raise my eyebrow at some of the differences between English and Swedish rules of law as I read the courtroom chapters. Salander frequently gets away with referring to depraved doctor Peter Teleborian as “a bastard” (he is one – but in court??), the defensive is allowed to bring in a free-speaking assistant counsel at the drop of a hat, witnesses – one of which is the defence lawyer’s brother – seem to just wander in without the formalities of a courtroom, and the judge seems too quickly to compromise with Lisbeth’s demands and drop the charges against her. It was undoubtedly the correct decision (particularly in light of Giannini’s decimation of the prosecution), but the manner in which it was reached just seemed too relaxed and – dare I say it – unprofessional.

Regrettably the last novel author Larsson wrote before his untimely death in 2004, The Girl Who Kicked the Hornets’ Nest was in fact only the third in a proposed ten stories in his “Millennium” series. In bringing a close to the injustice which has plagued his iconic heroine, the novel actually works remarkably well as a culmination to Lisbeth’s personal struggle, even if I would still be incredibly interested to see where Larsson planned to take his hard boiled, ass-kicking crime-fighters next.


In a CR@B Shell: Hornets’ Nest presents a compelling story coupled with wonderfully rounded (if psychologically complex) characters. Larsson was clearly very passionate about this story, and it’s easy to see why – but as Lisbeth understood; it is possible to make your point without letting your word count get away from you.
aaaaa
Created by ~ CR@B Howard ~ at 12:44