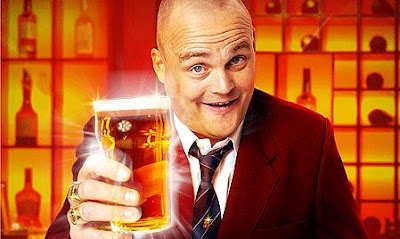 It seems adverse to say that I was apprehensive about going to a live show that I wanted to see enough to book tickets, but when you discover that you're sitting in the second row at a stand up gig where the comedian's entire act revolves around his larger than life persona isolating then poking fun at members of his audience, you can, perhaps, understand my apprehension.

Al Murray, the jolly, jingoistic, in yer face pub landlord is certainly a whirlwind to behold. He took to the Theatre Royal stage on this extra date of his “Barrel of Fun” tour for a mammoth two hours and twenty minutes – and that's after I've deducted twenty minutes for the interval! Value for money for sure, and an almighty stretch considering he barely shuts his motor-mouth for the entire show, even if he is constantly whetting his whistle with pint after pint... after pint!

Even without his iconic bar set for comfort, the maroon-jacketed blurter lost none of his on-stage charisma, so enraptured in his madcap alter ego is he, bounding, chortling and stamping his way through the evening in his Doc Martins. It is masterful how effortlessly he manages to tie audience member's most off-the-wall affectations into riotous – but (mostly) well-meaning – put-downs, zipping through the rows with a barrage of questions and yet somehow being able to take all this on board and refer back to it later in the gig without once slipping up.

Yes, in case you were wondering, I did get picked on. Asked to stand-up to parade my stripy “convict” top to the auditorium, Al then set about ripping me to shreds simply because my favourite book is Frankenstein (well, one of; it was the first title to spring to mind), before coming to the assumption that I must therefore like Star Wars and Doctor Who, too (in fairness, he hit the nail pretty firmly on the head there!) and should most definitely grow up. Oh, and he called me a twat; the charmer!

It may sound harsh, but trust me, I got off lightly compared to some of the other old balls– I mean, members of the public seated around me. I was never returned to, but many found themselves the subject of night-long callbacks and jests; from the guy who worked at Apple (“iPads are shit”), to the “dumb” student wasting three years on a Sports degree (“learning to kick a ball”), and the poor couple who have been going out for three years but still live separately (“sort it out!”). Oh, and then there was the woman who ran an Astronomy-themed B&B... sometimes you can't make it up!

Following the intermission, the second half continued in much the same vein to the first, but gradually became more familiar as Al proceeded to deliver his “inspirational” teachings to us. As he brought out his inflatable globe and started satirising each and every country (all the while hailing “Great” Britain the best), I began to pick up on his well-rehearsed act, having seen him deliver the same routine on various TV shows and DVDs. These “greatest hits” were still hilarious (particularly the topical ad-libs), but lacked the freshness or interactive wit which made the opening act such a hoot. Nevertheless, Al Murray is still well worth checking out live, as every night is guaranteed to be a completely different experience – just try to avoid sitting in the first two rows!


In a CR@B Shell: The laddish landlord was well and truly on form in Norwich, delivering one ale of a funny show. The second half was more structured than the freestyling first, but Al Murray truly shone brightest when ad-libbing insults to his “clientèle”. I'd definitely be up for another round!
aaaaa
Created by ~ CR@B Howard ~ at 13:56