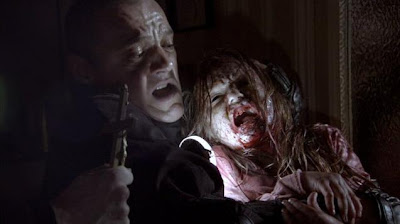 [SPOILERS] I don’t think I’m exaggerating when I laud 2007 Spanish zombie horror [REC] as a modern day genre masterpiece. Tense, claustrophobic and pant-wettingly terrifying, the “found footage” method made for such an immersive experience that you became completely oblivious to the fact you were reading subtitles (which kinda makes the quick fire Hollywood cash-in – sorry: shot-for-shot remake, Quarantine, a wholly unnecessary experience).

Written and directed by the same team of filmmakers (always a good start), and following immediately on from the bleak and abrupt events which closed the shutter on the original, [REC]² delivers a similarly apprehensive atmosphere by returning to the quarantined apartment building in downtown Barcelona to once more face the dead-eyed hordes of rabid inhabitants.

We’re again in shaky-cam point of view mode as an unsuspecting team of SWAT-like GEO’s equipped with helmet-mounted cameras are led into the seemingly deserted hellhole by Ministry of Health official Dr. Owen (Mellor), who isn’t entirely honest about his intentions… It is here that [REC]² makes a daring departure from traditional zombie flicks – and you’ll either love its ingenuity or consider it a leap of faith too far; either way, the film loses none of its intensity or fury as the source of the epidemic is revealed. 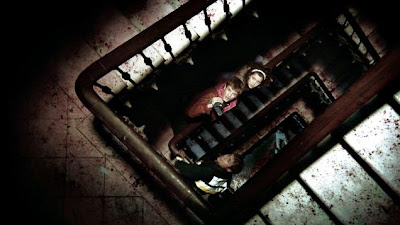 There’s not a crashed space probe or leaking vat of nuclear waste in sight – these zombies (if, indeed, that classification even applies?) are possessed by demonic spawn, and “Dr.” Owen is in actuality a priest on a mission from the church to purge the Anti-Christ through the recitation of religious mantra and locating a vile of restorative blood from the original source; namely, the gangling Medeiros girl who dragged reporter Angela (Velasco, who returns here) into the darkness in the penthouse loft in [REC]’s unnerving final reel.

Swapping perspective between the dwindling team of GEO’s and a trio of dangerously curious teen pranksters (Ros, Batllori, Poch) who sneak into the building moments prior to quarantine via the sewer system, [REC]² pulls no punches in its unrestrained carnage as even small rage-infected children are not safe from a shotgun to the head. The speed with which the possessed attack may not be in keeping with George A. Romero’s 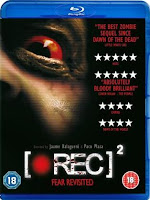 shuffling corpses, but the heart-racing panic which grips you when the raging beasts surge is undeniably chilling. Watch out, also, for a ceiling-crawler who moves against gravity with spider-like agility.

From Exorcist-like conversations with the tricksy and deceptive devil to night vision-aided hunts in the dark for answers the light “blinds you from seeing”, this kinetic sequel is certainly not afraid to stalk new ground, which is a remarkable achievement when the cameras barely leave the confines of the tower block.


In a CR@B Shell: A fearlessly courageous diversion from subgenre tradition and inventive expansion of concepts only glimpsed in the first film, [REC]² also doesn’t disappoint on delivering yet another frantic and fraught first-person fright fest of frenzied flesh-feasters. Highly [REC]ommended.
aaaaa
Created by ~ CR@B Howard ~ at 13:08