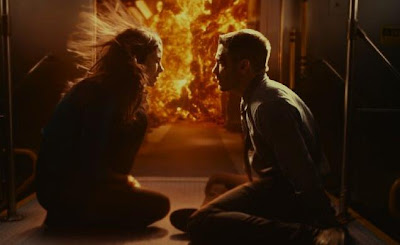 [MAJOR SPOILERS] Harnessing the echo of electrical brain activity left behind after a person dies, radical scientists are able to plug a missionary into the last 8 minutes of a soon-to-be-dead person’s consciousness. This is the mind-bending situation Army helicopter pilot Captain Colter Stevens (Jake Gyllenhaal) finds himself in in Source Code, Duncan “Zowie Bowie” Jones’s much anticipated directorial follow up to his masterful debut Moon.

Under the blunt scrutiny of mission controller Captain Goodwin (Vera Farmiga) and project mastermind Dr. Routledge (Jeffrey Wright), Stevens is repeatedly transported into this brief capsule of memory left behind by teacher Sean Fentress, as he and a double-decker trainload of innocent commuters tragically lose their lives in a terrorist-planned explosion which took place earlier that day. It is up to Colter, so he is forcefully reminded, to use these 480 seconds to investigate the carriage and its passengers, to locate the phone detonated bomb and identify its sadistic maker. 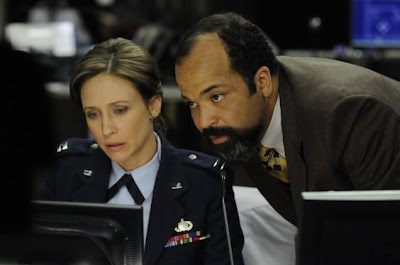 There are obvious shades of Groundhog Day and Quantum Leap in the body-swapping, time-repeating, scientifically ludicrous concept, but this isn’t time travel (or, indeed, a comedy); the events have already taken place, so using the precious minutes to save individual passengers – such as Sean’s cute colleague Christina Warren (Michelle Monaghan) – is an exercise in futility. The “source code” must be utilised to analyse and investigate, so to avert any further attacks from the unapprehended bomber.

After the opening 8 minutes, as Colter jolts out of “death” for the first time only to reawaken in a darkened pod with just Goodwin’s face on a monitor for direction, it is clear that the understandably confused and disorientated former helicopter pilot is being lied to. Goodwin and Routledge’s evasive answers reveal only the sketchiest details of Colter’s mission; time is of the essence they keep reminding him, but there is much more to their ambiguity than efficiency…

Source Code was certainly a brave sophomore project for Jones to take on – its blockbusting set pieces, busy cast, jumpy editing and high tempo, race-against-the-clock structure are something of a departure from the reflective subtleties of Sam Rockwell pacing around a space station. Both this and Moon demand the audience take a leap of faith for creativities sake, but while Jones's first feature granted us emotional levity, Source Code’s overly complex internal logic took one too many risks for my liking and ended up falling flat on its overreaching face. 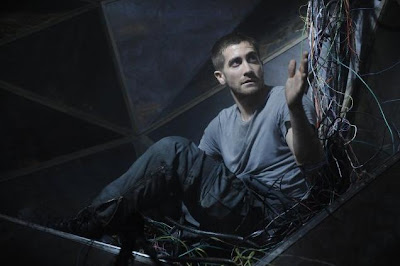 By the film’s third act, Colter has fallen in love with Christina (a woman he has only spent variations of the same 8 minutes with – 8 minutes in which he has had the overriding pressure of hunting out a bomb suspect!) and completely rewritten the laws of time and space, in severe discordance with the programme’s creator’s prior account of the source code’s limitations! I’m sure Jones and writer Ben Ripley could launch into a longwinded, jargonous explanation to verify Colter’s event-altering master plan, but this just screams “PLOT HOLE!” to me.

So, Colter gets closure in his relationship with his father (Scott Baluka) whilst still living happily ever after with the new-found love of his 8 minute (after-)life? But are we seriously meant to swallow that the pair are now living in an alternate dimension of reality where “Sean” foiled the bomber, saved everyone’s lives and is now destined to live out the rest of his days with an Army Captain’s conscience? Is Christina not even a *little* shocked that Sean is no longer Sean but Colter? Does Colter not mind looking in the mirror and seeing Sean’s face?? These are rather major qualms which remain wholly unanswered as the end credits roll...


In a CR@B Shell: An exhilarating and gripping action thriller which sadly unravels in a mess of mumbo-jumbo plot-holes and headache-inducing illogicalities for the sake of a sentimental conclusion. There are fragments of promise here, but ultimately, Source Code is one giant (quantum) leap back from the superior Moon.
aaaaa
Created by ~ CR@B Howard ~ at 12:46