Wail of the Weeping Woman 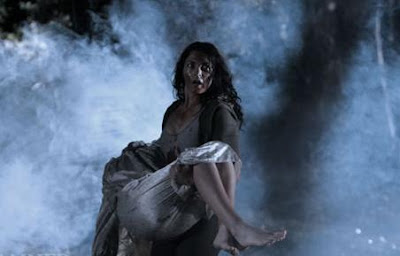 Every week you'll witness a smattering of schlocky new genre releases dotted around the lower echelons of supermarket's DVD charts. Be they cheap cash-in sequels (such as the recent Mirrors 2) or small independent passion projects (such as the “After Dark Originals” series), few are worth shelling out your hard earned pennies for. There's a reason they didn't get a wide release, after all. Every now and then, however, one such cinema-evading spooker piques my novelty-susceptible interest – and 2010's Damned by Dawn, from intriguingly-monikered Australian's “The Amazing Krypto Bros”, certainly did that.

Admittedly, I was initially drawn to what I thought was a fanged vampire on the UK's whitewashed cover (see bottom pic), but a read through of the synopsis did little to dampen my interest; a soul-collecting Banshee with a scream to raise the dead sounded refreshingly original. And original Damned by Dawn undoubtedly is – even if my admiration was blotched by mild disappointment by the roll of the end credits.

As the life seeps evermore noticeably from her bed-ridden grandmother (Klingberg), twenty-something Claire O'Neill (Willner) returns to her father's (Stratford) run-down farmhouse for the first time in 18 months – with her boyfriend Paul (Alder) in tow. As Nana starts talking of a woman who will come to claim her soul when she passes, a spooked out Claire dismisses the creepy chatter as little more than illogical ravings – until the family are awoken by piercing shrieks in the middle of the night and their home is under threat from the recently risen dead; under the command of a wailing woman in white... 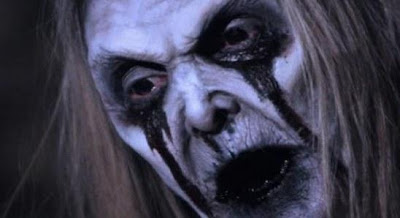 The screen continually cloaked in a dense fog, and the narrative unfolding entirely on the grounds of the eerie and isolated rural house, the filmmakers certainly cannot be accused of not summoning up a remarkably appropriate atmosphere. The Banshee – a blood-stained, ghost-faced, rag-wearing spirit – is a genuinely creepy creation. Alas, it soon becomes clear that her arsenal of abilities is strickly limited to floating and shrieking (the majority of which she does off screen) – making her no more fearsome than the ghouls she awakens.

On the subject of the ghouls – unearthed, supernaturally animated corpses – you have to admire the FX department for their budget-restricted effort, but, in truth, flying skeletons are not scary, and some of the atmosphere attributed to the Banshee is irredeemably eradicated by these ludicrous foes. Nonetheless, I will conceed to being impressed by the sequence in which Claire and her father speed away from the house in a car as countless airborne ghouls fly at the panic-stricken escapees.

Attempts to justify and add depth to the horrific events by tying the modern day phenomena to the O'Neill's family history by way of a black and white photograph, an heirloom urn and diary extracts from generations past are well meaning but ultimately fall short of lucid. As do the poorly-executed endeavours to grant the human characters with rounded personalities (the father's quickly forgotten kookiness; Claire's scarcely unmentioned secret). Ultimately, the film's greatest elements are the most gory (a gut-spewing, unrelenting zombie attack in the kitchen), and although the make-up is slapped on a little thick in parts, Damned by Dawn is an admirably gutsy independent chiller.


In a CR@B Shell: Small in scale but big in ambition, Brett Anstey's Damned by Dawn may forsake some of its unearthly ambiance with unintentionally gigglesome adversaries, but make no mistake – there is a gallant and damned spirited concept at the core of this low budget offering.
aaaaa
Created by ~ CR@B Howard ~ at 14:37