The Brawl of Rome 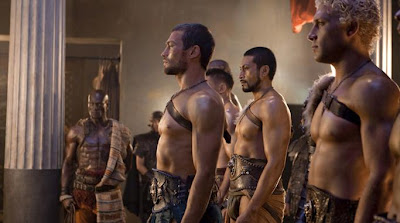 Hyper-stylised in the same green screen heavy comic book fashion as Zack Snyder’s vibrant 300, US channel Starz’s hit historical action series Spartacus: Blood and Sand is an effervescent cacophony of über violent slo-mo battles sequences, hyperbolic gore, full frontal sex scenes and the kind of language that would make even Roy “Chubby” Brown blush. To say it isn’t for the fainthearted is something of an understatement.

The torrent of graphic adult content (purportedly to portray the ancient Roman society as authentically as possible) certainly takes some getting used to; seeing amiable Scot John Hannah – a man best known for his comic roles in Four Weddings and a Funeral and The Mummy – roughly take a slave girl doggy style while he makes idle chatter with his bathing wife, Lucretia (Lucy Xena Lawless), seems a gratuitous exercise in titillating the lowest common denominator, but if you learn to look beyond the frequent vulgarities (and tune out the words “fuck”, “c*nt” and “cock”), you’ll find there’s adequate substance to counterbalance Blood and Sand’s in-your-face style. 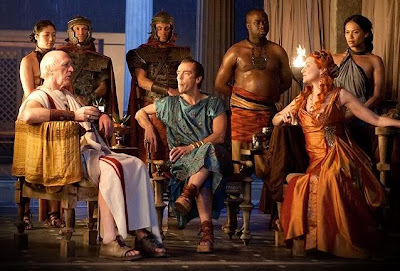 The early episodes in this 13 episode first run see our Thracian hero (Andy Whitfield) betrayed by Roman general Gaius Claudius Glaber (Craig Parker), separated from his loving wife, Sura (Erin Cummings), and enslaved to fight for his life as a gladiator in the ludus (or training compound) of ambitious but lowly domina (master) Quintus Lentulus Batiatus (Hannah). Aside from the grief swirling beneath Spartacus’s buff macho exterior, there’s little depth to the indulgence as heads roll, men fall and claret splatters the screen in overly protracted arena showdowns. Episode 4, “The Thing in the Pit”, is a prime unapologetically visceral standout.

But as the series progresses, layers compound and development is made – so fluid it’s almost subtle – as allegiances are formed, enemies are made and plots are put into motion. The quickly-revered Spartacus befriends fellow slave fighter Varro (Jai Courtney), a man who fights to sustain his wife and child, while Capua ’s champion, the Gual, Crixus (Manu Sinbad Bennett), takes a patent disliking to the newcomer who rivals his crown. Even in the political arena it’s every man for himself, as Batiatus reveals a wickedly devious edge in his acquirement of coin and nobility, and Lucretia prevails through a difficult acquaintanceship with snotty senator’s daughter – and Glaber’s wife – Illithiya (Viva Bianca), purely for societal gain. 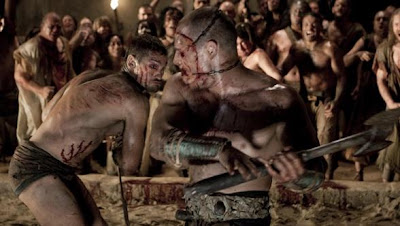 Life is insignificant, everyone is a bastard and loyalty is a foreign concept in this dog-eat-dog culture. But there are varying degrees of immorality, and you will find your opinions shifting as frequently as the sands. Meathead Crixus lets his elevated status go to his head and you don’t squirm when he is humbled, but he fights for honour and his secret romance with Lucretia’s servant Naevia (Lesley-Ann Brandt) proves that a heart beats beneath his six pack. Conversely, Batiatus’s bookkeeper-come-henchman, the crippled Ashur (Nick Tarabay), initially appears harmless enough, but he has a slimy and shrewd manner which saw him fall greatly in my estimations.

I found myself becoming evermore intrigued and attached to the character’s cause as the season advanced and – much like its overworked gladiators – grew ever stronger. A way to judge your enjoyment of Spartacus is to grade your level of outrage as heroes turn to villains and lives are extinguished at a disgraceful rate of knots. Episodes “Delicate Things”, “Mark of the Brotherhood”, “Whore” and “Party Favours” all left me dumb-founded at the unreservedly brave and brazen storytelling, and salivating at the prospect of more to come.

A myriad of personal themes and foiled schemes collide in spectacularly epic fashion in the season finale “Kill Them All” as a vengeful Spartacus leads Batiatus’s gladiator throng in an uprising against their insidious dominus. The relentless pace and interweaving punchlines to many of the character’s long-fated journeys highlights just how many threads this thrilling saga has deftly spun and juggled inbetween the headline-grabbing, crowd-pleasing spectacle of tits and titans. Clearly you can have your cock and eat it…


In a CR@B Shell: Flesh and death are in abundance in this testosterone-pumped swords and scandal saga. Lower your inhibitions, adjust to the primal attitude and ostentatious styling and soon you’ll discover that Blood and Sand is a powerhouse of titillating storytelling which rewards greatly for sticking with its bold, base characters. Glory awaits, brave viewer.
aaaaa
Created by ~ CR@B Howard ~ at 03:17