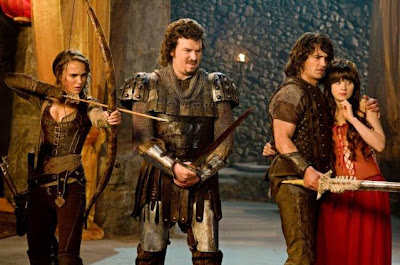 Good-for-nothing royal waster Prince Thadeous (Danny McBride) half-arsedly agrees to accompany his valiant brother Fabious (James 127 Hours Franco) on a noble quest to rescue the latter’s bride-to-be, Belladonna (Zooey (500) Days of Summer Deschanel), from the clutches of evil sorcerer Leezar (Justin Theroux) before the two moons meet in this pseudo-medieval fantasy-come-puerile comedy from the director of the tiresome waste of film Pineapple Express.

Why then, you might enquire, did I endeavour to see Your Highness? After all, Eastbound & Down star Danny McBride is hardly renowned for his high brow sensibilities. But then I wasn’t expecting Camelot or Excalibur, yet still I held out hope. Hope that co-writer’s McBride and Ben Best’s adoration of the fantasy genre would lead to an inspired and tasteful – albeit tongue-in-cheek – romp rather than a lazy spoof from the insipid Vampire’s Suck stable. And just look at the talent involved: Portman, Franco, Jones, Deschanel, Dance – what could *possibly* go wrong? 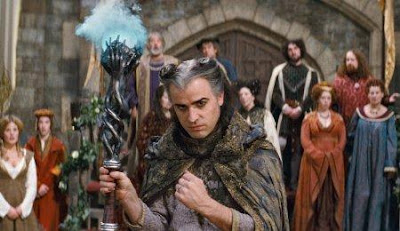 Well the issue certainly isn’t with the cast; they’re all game for a laugh (impish Toby Jones even strips naked to reveal a worrying lack of genitalia), and the homage to retro "swords and sorcery" adventures makes for a remarkably rousing quest as the Prince’s encounter fantastical creatures, traitorous kinsmen, a village of murderous savages and a lithe female warrior (Natalie Black Swan Portman) on a mission of her own. It’s winding without being tortuous and the plot holds up well against legitimate genre staples. The problem, unsurprisingly, lies in the writer’s juvenile glee in profanity, drug use, nudity, cock jokes and excessive gore.

The juxtaposition between family friendly fantasy fare and offensive vulgarities is initially quite humorous; the word “fuck” comes up a lot, as do frequent references to boobs, weed and blow jobs. Trust me; you’ll titter against your better judgement, particularly at Thadeous’s scrawny and put-upon dogsbody, Courtney (Rasmus Lead Balloon Hardiker), who surely knows his master’s ineptitude, yet remains ever-loyal.

But when the CGI is as first rate, the cast as glitzy, the score as epic, the locales as majestic and the sorcery as mind-blowing as on display in Your Highness, you soon start to question the awkwardness of this disjointed union: when it is eluded that a Jim Henson-alike puppet molested Fabious as a child, you’ll feel increasingly uneasy and long for the heroically innocent mythological escapades of yesteryear where the damsel in distress isn’t under threat of being raped and impregnated with a dragon's seed.


In a CR@B Shell: By toning back the crudeness, Your Highness *could* actually have been a remarkably entertaining retro feel-good romp, but McBride is more interested in sleazy immaturity, leading to a schizophrenic film which looks grand but acts goofy and demonstrates not an iota of moderation.
aaaaa
Created by ~ CR@B Howard ~ at 10:12