Mr Sandman Dream Me a Death 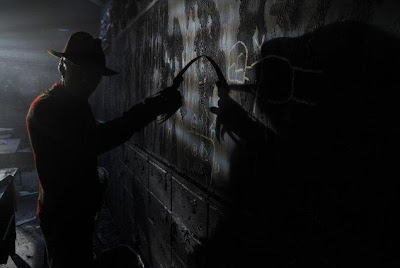 Having posted THIS cathartic rage-dump review of his feelings towards the 21st century reimagining of the 80's most iconic dream-stalking child molester (competition was fierce in that category, let me tell you), Mr. Downie of Thom's House of Words is going to be mighty aggrieved to read that I didn't find this Michael Bay-produced offering to be wholly disagreeable. But then it has been so long since I watched Wes Craven's 1984 original horror hit that I can scarcely remember the details vividly enough to draw an accurate comparison.

I am reliably informed that the story is by-and-large identical: a group of high school kids are terrorised in their dreams by a fedora-wearing maniac with a deformed face and razor-sharp hand wear, who has the ability to not only kill them in their sub-conscious, but kill them for real. Where 2010's A Nightmare on Elm Street breaks away from the source material is in its elaboration upon Freddy Kreuger's (Jackie Earle Haley) origin story. Remake scribes Wesley Strick and Eric Heisserer's have bulked-up his base biography and visualised flashbacks to the monster's days as a pre-school caretaker with an immoral secret.

It's dark and disturbing stuff which doesn't sit particularly well alongside the more fantastical boogieman slasher flick elements, but the attempt to further demonise the striped jumper-wearing foe (who became something of a camp quipper by the tail end of the sequels) is totally justified. I will admit to being impressed by the slick link made to folk tale The Pied Piper of Hamelin, where the multi-coloured instrumentalist kidnapped the children of the German town as vengeance for being cheated by their parents. Here, Kreuger was hunted down and burned alive for his sickening indecency by the children's rightfully outraged 'rents.

As the line between reverie and reality becomes blurred for determined but sleep-deprived classmates Nancy (Rooney The Social Network Mara) and Quentin (Kyle Gallner), there's no telling when Freddy will materialise, leaving them (and us) constantly on edge, a point further enhanced by the vulnerable hopelessness of being completely at his mercy in his world. How do you kill a man who is already dead? How do you stay awake long enough to formulate a plan?

Whether Elm Street needed revisiting is something of a moot point: all the most lucrative franchises are milked to death in this current cinematic climate. Whether this new Nightmare is simply a case of dressing up an already decent enough cult classic in glossy modern day clothing, I'm sadly not disposed to comment. I will, nevertheless, close by saying that I wasn't completely won-over by Jackie Earle Haley. For all the impressive prosthetics, CGI-aided wounds, and even wearing the iconic costume, he still isn't Freddy Kreuger. Robert Englund made the role his own and Haley – for all his unquestionable ability – can only be a pretender to the fedora.


In a CR@B Shell: When viewed independently of the original, A Nightmare on Elm Street 2010 is a decently sleek and creepy slasher movie with a wickedly spirited premise. Of course it isn't remotely original, but I've seen far worse, far lazier and far more futile efforts in this remake-infatuated era.
aaaaa
Created by ~ CR@B Howard ~ at 15:53