Beneath the sleek glossy surface of this futuristic Manga-adapted CGI 'toon beats a very human heart. In point of fact, that turn of phrase works just as fittingly as a microcosmic metaphor for the dualistic bionic central character in this high-flying robot-who-thinks-he's-a-real-boy adventure. Astro Boy is a morally underscored journey of self-worth and acceptance, akin to Pinocchio retold for the Ben 10 generation who are too young for AI but too cool for Disney. 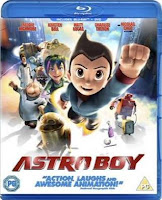 The eponymous automaton is built by a brilliant scientist (Cage) in the image of the son (Highmore) he lost, only to be rejected by the grieving father and forced to (literally) fight to find his place in a world which looks down upon robots as utensils built to serve. That is, until the citizens of Metro City need saving from a Presidential mad-man (Sutherland) determined to do anything to stay in office. Sure, it's hardly revolutionary, but Astro Boy doesn't deserve to be thrown on the scrapheap of pixelated misfires, either.


CR@B Rating: Astro Boy's innocently cherubic looks and swanky arsenal of gadgetry cloak this sombre coming-of-(space)-age tale in the sleek identity of an exhilarating sci-fi Saturday-matinee spectacular. Kudos to project spearhead David Bowyers; this 21st century reinvention is a blast on both fronts.
aaaaa
Created by ~ CR@B Howard ~ at 12:10