Back to the Futurama 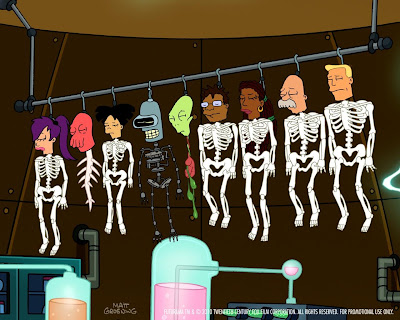 Good news, me! Now that I once more have a multi-region DVD player nestled in my laboratory alongside my horde of doomsday devices, I am opened up to a wealth of audio/visual entertainment I would previously not have been privy to – and I'm not just referring to my stash of episodes from that banned religion S*** T***! Top of my must-buy list was this latest volume of intergalactic satire from the wondrous noggin of The Simpsons’ brainchild Matt Groening. Huzzah!

The mind boggles as to why the robot hell Sky One has yet to set a UK transmission date (or why Fox have yet to release the set on region 2), but don’t let that mislead you: Fly, Leela, Bender, Zoidberg and the rest of the Planet Express crew are well and truly back, baby! So strap yourselves in, fill your tank with dark matter, sweet talk the auto pilot and prepare for an intergalactic voyage on the Comedy Central Channel, meatbags! 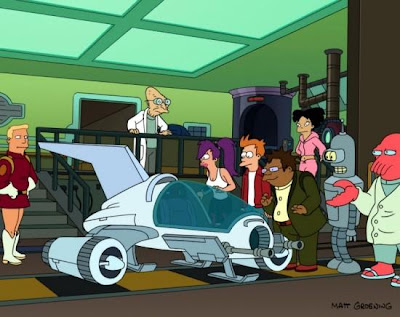 Rescued from the black hole of cancellation and back on an all new channel, this “sixth season” (if we count the four DVD movies as a 16 episode run) has been split in two, with this first volume of 13 episodes being followed in June 2011 by another 13. Spread over two discs, the episodes look fantastic in widescreen format, even in spite of all the much-debated budgetary cuts resultant from a move to a cable network. The scenes rendered in 3D (of particular note a scene from “The Mutants Are Revolting” in which Bender remains static while holding a combustible soufflé as the ship jilts and wobbles around him) look particularly clean and vivid.

Series premiere “Rebirth” is a necessary bridge between fourth movie Into the Wild Green Yonder’s apparently conclusive finale and a return to the status quo – via a vat of stem cells, a robo-Leela and a Cyclops-scoffing monster. It’s as genre barmy as Futurama has ever been, but the true belly laughs don’t kick in until episode two’s riff on Adam and Eve with Zapp and Leela stranded (and nude!) on a lush Eden-like planet. Oh my!

The satire comes thick and fast in “Attack of the Killer App” and “Proposition Infinity”, in which we witness space-age riffs on a technologically enslaved iPhone nation, Twitter, Susan Boyle (yes, really!) and Proposition 8 (only the right for homosexuals to marry has been tweaked to campaign for robosexual union as Bender and Amy do the nasty, much to the Professor’s chagrin). It’s great that a series set a thousand years in the future is still able to make pertinent points about contemporary issues, although at times it does feel a little too closely related to reality. 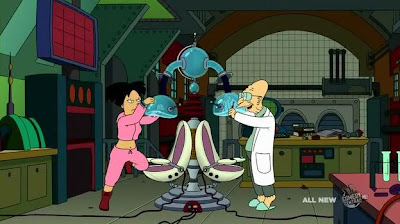 Fry’s innate idiocy is once more mined in “The Duh Vinci Code” (no prizes for guessing the inspiration behind that one!), where the Fry and his great-great-great-great-gr.... nephew unlock a secret hidden in the great Renaissance artist’s works which sees them transported to an alien world where the man himself still lives – and is taunted for his relative “stupidity” by a race of gifted aliens. The source reference has long since past its kitsch peak, the story is far too much of a stretch and the plot weak, making this one of my least favoured episodes of the new batch.

One of, I say, because that dishonour is held by the (mid-) season closer “The Futurama Holiday Spectacular”, which I may dare to suggest is the worst episode of Futurama ever – and I usually love the non-canonical anthology episodes! Here we get three mini-adventures, each based around a resource-saving environmental cause related to a religious holiday: Xmas, “Robonica” and Kwanzaa . The plots are awkward and forced, the incessant musical numbers sound dreadfully rushed and – the icing on the Popplers – the Space Bees first seen in Series 4’s “The Sting” speak – in English!

Now that I’ve released my rage in the angry dome, I’ll move on to more positive subjects. Far and away the new season’s crowning glory is “The Late Philip J. Fry”, a story with such awe-inspiring scope, yet such intimate sentiment, it defies belief. Fry, Bender and the Professor set off through the ages in a time machine which only travels forward, jilting Leela on her birthday – and subsequently throughout the rest of her life! Will the time travellers ever return home? Will Leela ever forgive Fry for standing her up? Will mankind really be ensalved to giraffe's in the future? Sweet, touching and amazingly crafted whilst remaining as witty as ever, and it's undoubtedly an instant Futurama classic in just 22minutes. 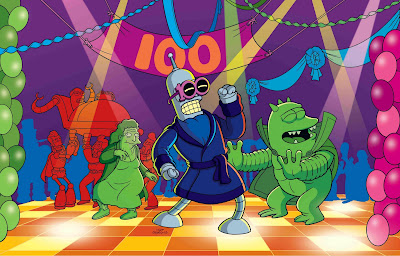 Other successful episodes are “Lethal Inspection”, in which Hermes and Bender team up to track down the Bureaucrat who failed to notice a mortal glitch in Bender’s programming, “That Darn Katz!”, in which Nibbler and Amy must try to stop a race of irresistibly cute felines from altering the orbit of the earth, and the aforementioned “The Mutants Are Revolting”, the series' 100th episode benchmark, which sees the crew sentenced to a spell in the sewers – and will have an almighty impact on the future demarcation of the deformed sub-species in all future episodes.

If I’m being unreservedly honest, a couple of potentially great premises do fall *slightly* short of the mark in such episodes as body-swap farce “The Prisoner of Benda” and the return of the rulers of Omicron Persai 8 in “lrrreconcilable Ndndifferences” (excellent Comic-Con prologue exempt). The feeling that, after reaching their centenary, the writers are trying too hard to keep storylines as fresh – yet characters, in-jokes and callbacks as familiar – as possible is a clearly observed contradiction. Nevertheless, there is more than enough laugh-out-loud content within this baker's dozen of all-new escapades to be deemed a successful, and oh so welcome, reboot.

In a Decapodian's Shell: Thank the Robot Devil, my favourite Matt Groening animation is reborn! Futurama – Volume 5 delivers a veritable feast of in-jokes, modern day satire and Dr. Zoidberg, and although some episodes don't *quite* hit the shows lofty zenith of old, anyone who doesn't rejoice at the return of this continually rewatchable space-com can bite my hairy human ass!
aaaaa
Created by ~ CR@B Howard ~ at 03:03