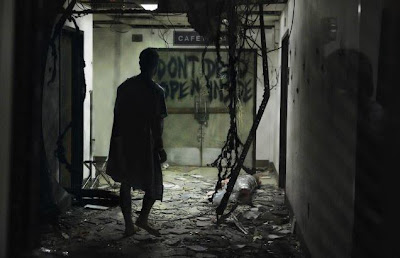 Genres carry with them certain weights of expectation. For instance, tradition dictates that comic books are action-packed and visually resplendent creations which stretch the limits of the imagination with all manner of supernatural and superhuman heroes and foes. Likewise, zombie horror flicks feature an abundance of limb-trailing, flesh-chomping, gore-splattered set-pieces which turn the stomach and jangle the nerves. “They’re coming to get you, Barbara...” and all that jazz.

Being a zombie horror show based upon a renowned comic book series, AMC’s The Walking Dead had twice the responsibility – nay, thrice, with feature film director (and ace adaptor) Frank The Shawshank Redemption Darabont at the helm – to kick some major ass. Things certainly started promisingly in the epic pilot “Days Gone Bye” (#1.01), which sees our protagonist, Georgia sheriff deputy Rick Grimes (Andrew Teachers Lincoln adopting a US twang) awaken from a coma in hospital only to find everyone has deserted him and everything has gone to hell, a la 28 Days Later. Alas, as this promising series progressed, I must confess to being *slightly* let down. 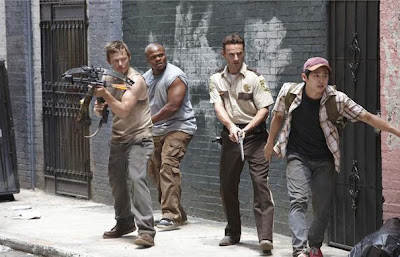 Regulars to The CR@B Shack will know of my near-fanatical appreciation of George A. Romero’s Living Dead saga (see my reviews of Night (1990), Land, Diary and Survival of the Dead) – to say I was pumped for a weekly dose of undead post-apocalyptic carnage is an understatement. And yes, The Walking Dead does look amazing, with the washed-out colour palette perfectly complimenting the desolate wasteland which once was a bustling hive of humanity, and the cinematic special effects are leagues above what a small screen budget would normally accommodate. But season one still failed to sate my gorehound appetite for a number of key reasons.

I am all for directors underlining their visual glamour with satiric depth – Romero peppered all his horror films with stinging societal critiques (decaying zombies = decaying society) – but The Walking Dead seemed far too wrapped up in the human drama aspect, much to the detriment of any legitimate chills. For instance, “Guts” (#1.03) sees Rick join a small group of survivors in Atlanta , only for T-Dog (Singleton) to be viciously pummelled by racist hick Merle (Rooker). In “Tell It to the Frogs” (#1.04), survivor Shane (Bernthal) attacks an uncouth wife-beater to within an inch of his life, while “Vatos” (#1.05) sees a group of hostile city survivors kidnap Greg (Yeun) only for both parties to learn that appearances can be deceiving. Surely, when the world has come to an end, these people have slightly larger concerns than the colour of a man’s skin? 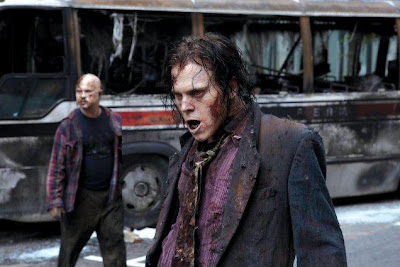 Furthermore, at a mere six episodes, this premiere season was simply too darn short – there was a lack of flow as plot points came to the fore then disappeared completely (leaving many to remain wide open), and because of this the vague story arc – initially of Rick finding his wife (Callies) and son (Riggs), then of the continued survival of the camp – suffered greatly. I’m not au fait with the source story, but these six episodes did not feel like a complete series with any sort of conclusive element.

As the series ends, Rick is still completely clueless to his wife’s awkward love affair with best mate Shane, Merle has escaped in the group’s van never to return, lone wanderers Morgan and son Duane haven’t made it to the camp, Jim’s (Rothenberg) prophetic sunstroke delusions have led to no major revelations, and – most disappointing of all – the decision to leave the forests and convoy to military base the CDC in the hope of finding a cure in “TS-19” (#1.06) granted us a wholly anti-climatic finale which wielded absolutely no kind of breakthrough to the pandemic whatsoever.

I appreciate that real life doesn’t always provide neat answers to every single question, and people do pop into your life then leave just as suddenly, but serialised television requires such conclusions to satisfy the audience; otherwise why do we return week after week if we’re just left hanging? Granted, a second season has been confirmed (to consist of a much more appealing 13 installments) and some plot points will be picked up again there, but a season should be able to stand up on its own as a complete entity, and unfortunately, in that respect, The Walking Dead’s opening season shuffles and lumbers and eventually loses its legs altogether.


In a CR@B Shell: Less a horror and more a heavy-handed comment on society which is so concerned with making humankind look like the villain that it fails to capitalise upon the real rotters. The Walking Dead has promise, but as a zombie nut, I was hoping for more bloody carnage and less survivalist drama.
aaaaa
Created by ~ CR@B Howard ~ at 14:11