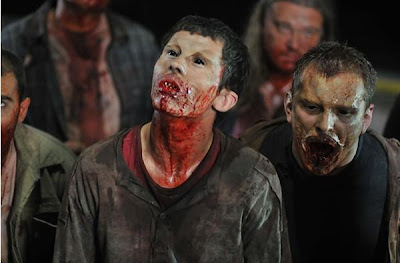 Living in a backwater hovel which makes my home town look happening, 18 year old Amber (Courtney Hope) has aspirations to move to the city. She finally decides to take the plunge after her alcoholic mother (Laurel Lefkow) drunkenly lets slip one evening that her daughter isn't her biological kin at all... Persuading her pot-loving, party animal friends to accompany her on a road trip to check out some potential digs, the troupe of typical teens are grateful for the offer of hitching a ride in the back of passing trucker Bernard's (Bruce Highlander Payne) Arctic lorry after their car conks out mid-journey.

From the “After Dark Originals” stable of horror, Prowl is surprisingly restrained in establishing and building up its premise, with the first half an hour providing zip in the way of actual scares. However, as the journey progresses and Bernard refuses under any circumstances to stop, panic kicks in as the group realise they are trapped. Their fear accumulates when they discover that Bernard's cargo is in fact hundreds of bags of blood. When the lorry finally pulls to a stop and the doors are opened, the group quickly discover that they haven't been freed – they're in a disused slaughterhouse where they're on the menu, being picked off by fanged foes lurking in the shadows... 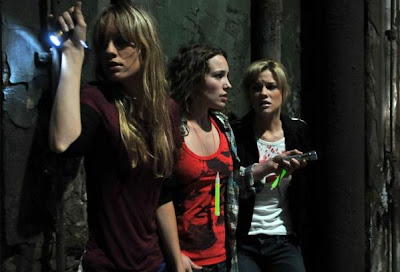 The blood-sucker's aesthetics are clearly heavily influenced by the terrifically terrifying beady-eyed snarlers from 30 Days of Night (check out my review of the DTV sequel HERE), only these feral beasts have also been granted base-jumping skills and gravity-defying agility to boot. They make for a great enemy, but unfortunately, when the cat-and-mouse chase kicks in, director Syversen refuses to keep the camera still and the frantic movements and constant jump cuts – coupled with the obligatory “gloomy” lighting – mean you miss out on all the bloody decent money shots.

The labyrinthine steampunk-esque slaughterhouse provides plenty of nooks and crannies to hide in, vats to clamber up and shadows to muddle your mind and cloak your presence, but Amber aside, the group of teens – akin to the red-shirted extras on Star Trek away missions – are dispatched far too quickly, and the minute the game-changing twist is revealed the film just gives up, limping to a weak unresolved conclusion after showcasing the biggest trick in its box. It's a real shame as the aberration was set up well without being either too blatantly obvious or too ludicrously outrageous.

For all its potential, Prowl's Achilles heel is definitely its trim runtime (just 70-odd minutes minus end credits). Too much was left unsaid and unresolved: What was the point of the teens texting pictures of the truck to their mates if nobody came to their rescue when they needed it? Were the blood-lovers truly vampires or a different species (after all, they were never referred to as such, weren't allergic to sunlight and no victim reawakened after death)? Why was their leader, Veronica (Saxon Trainor), training them up if she was adamant she wasn't their mother? And why did they need bags of (unrefrigerated) blood if Bernard's primary duty was to pick up future victims anyway?


In a CR@B Shell: Enticing premise, decent set-up, chilling foes and unexpected twist; it's a pity Prowl's camera work is so incomprehensibly hyperkinetic and its finale in such a hurry to scarper that it forgets to answer half the mysteries it sets up, as this “After Dark Original” would otherwise have been a thoroughly decent beast.
aaaaa
Created by ~ CR@B Howard ~ at 09:48