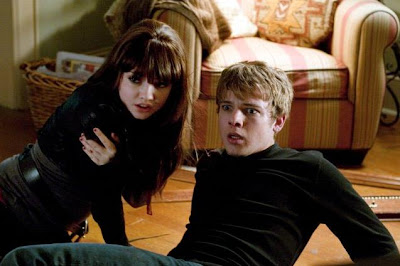 [SPOILERS] My eagerness for satirical slasher sequel Scre4m (which I do intend to see before it leaves cinemas) was sliced down a notch after watching “master of horror” Wes Craven’s limp preceding offering. My Soul to Take is an ineffective mess of schizophrenic murderers, spiritualist hokum, loose plot-threads, weak scares, laughable chills and fruitless characters. Basically, it’s utter drivel which just screams direct-to-video B-movie. So the studio released it in box office-inflating 3D and witnessed it deservedly bomb.

Craven's first writing and directing gig since New Nightmare in 1994, My Soul to Take’s failure is even more disappointing because the premise is actually fairly novel. The film’s downfall is in its dire execution. 16 years to the day after the community of Riverton suffered terrible losses at the knife-wielding hand of the “Riverton Ripper” (Raul Esparaza), the seven children born on the night he was shot are being picked off in grizzly murders. Did the Ripper cheat death to wreck his revenge, biding his time and building his strength over the intervening years, or are supernatural forces at work?

The answer, dear readers, is the latter, despite the wounded psychopath being seen running away from the ambulance which was transporting him and his victims to the hospital, thereby keeping open the possibility of his survival. But this is just one of the many red herrings Craven throws at us, which, when you consider the film as a whole, are actually rather large plot holes. The Riverton Ripper’s soul has, in fact, been transported into one of the seven newborns who came into this world the night he left it. That’s right; the killer was that darn evil that even death couldn’t stop him. Sound familiar?

Introverted teen Adam “Bug” Hellerman (Max Thieriot), with his lack of medical records, schizophrenic impressions and morbid ability to see the recently deceased in the mirror (!), is instantly marked as suspect numero uno. Except it obviously isn’t him, because Craven tries so frickin’ hard to indebt him with all these “guilty” attributes (watch out for the family reveal halfway through) that you’re constantly anticipating a twist. And, predictably, we get one – so then what the hell was all that “dead reflections leave knifes for me in the sink” nonsense all about?!

My Soul to Take features countless genre elements which would work reasonably well on their own, but as mere fragments of this scatterbrained plot they serve no conclusive purpose other than to irritate. For instance, one of the seven teens is a Jesus freak (Zena Grey) and another is blind (Denzel Whitaker) – but their distinctive characteristics lend no purpose to the narrative! It’s as if Craven had a load of “this would be cool!” ideas, but in his excitement failed to cohesively tie them all together. And this is a veteran of modern horror cinema!


In a CR@B Shell: Over thought, over wrought claptrap from a (former) master of the genre who, most criminally of all, fails to see how preposterous his creation is and plays the entire farce entirely straight. Won’t stop you laughing out loud though.
aaaaa
Created by ~ CR@B Howard ~ at 16:34