This One Time, at Cheer Camp... 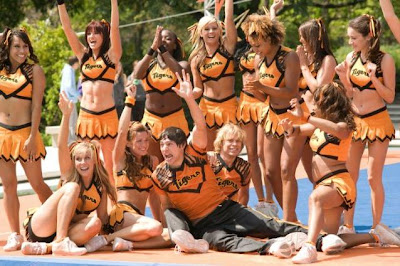 Before he hit the big league with last year's girl-who-cried-whore comedy Easy A (it’s funnier than it sounds; trust my review), director Will Gluck produced another fine – but thoroughly underrated – teen sex comedy in Fired Up! Shawn (D’Agosto) and Nick (Olsen) are two casanova high school football studs who – outraged at the thought of spending an entire three weeks without getting some lady action – ditch football camp in favour of spending the summer at cheer camp.

As cocksure wordsmith Nick works his lips through the 300 fit and limber cheerleading attendees, only stalling when trying to seduce married head coach Diora (Simms), Shawn finds himself falling for the one girl who is clued-up to their underhand motives and impervious to their flirtacious flattery – the captain of their own team, Carly (Roemer), who just so happens to also be dating the biggest douchebag alive in university fresher “Dr.” Rick (Walton).

Carly: “He’s Pre-med… at Illinois ”
Shawn: “Then why do you call yourself doctor?”
Rick: “Why put off the inevitable?” 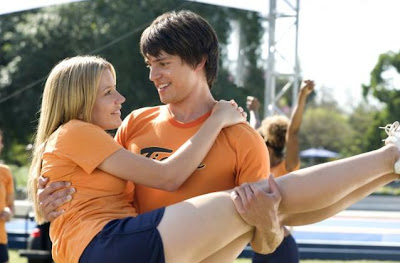 Sure, the plot is predictably sanguine fare as the camp’s all-important climatic competition looms and Nick pressurises Shawn into jumping ship early in favour of a football player’s house party (love or X-box – hmm, tough choice!!), but Fired Up! has real flair which elevates it above a generic direct-to-video fusion of archetypal genre tent-poles American Pie and Bring It On. Incidentally, the scene in which the entire camp lips syncs along to an outdoor screening of the “iconic” Kirsten Dunst cheer flick is laugh-out-loud hilarious.

All the ingredients which made Easy A such a thoroughly fresh and enjoyably edgy experience are in place: a deluge of self-aware popular culture references (“Animal House reference! LOVE IT!”), witty dialogue (“I told them in Spanish – how much clearer could I have been?”), quotable quips (“….just saying!”), an affinity towards costumed mascots and genuine characters with actual personalities. Sure, there’s also room for the mandatory bad language and (brief) scenes of gratuitous nudity, but even with such sex-obsessed personas, the lead duo are surprisingly likeable lads – and not the single-minded juvenile chumps they first appear to be.

Add into the mix a buoyant, up-beat soundtrack (The Ting Tings, Chumbawumba, Whitesnake, Avril Lavigne, OPP), bright, summery cinematography and a team of uniquely kooky supporting players who breath life into their niche clichés (brainiac younger sister, closet lesbian, camp extrovert, bohemian stoner), and you have yourself a vivacious and varied cheerleader movie which you’ll like even if you “could have one in the mouth and two in the hand and still win a straight award”… What? Just saying!


In a CR@B Shell: Much like a cheer pyramid, Fired Up! is a teen sex comedy which is so much more than the sum of its nimble parts. Spunky characters with audacious attitudes meant that “I was laughing, I, I, was laughing!” and I’m pleased to report that the director didn’t change his game too dramatically for his follow-up effort. “Goooooo Gluck!”
aaaaa
Created by ~ CR@B Howard ~ at 16:35