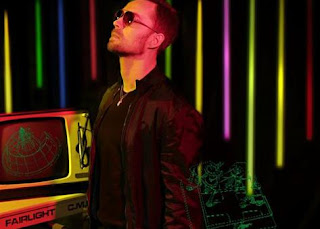 9. DUBLIN SKY: Kicking off the 3-song acoustic set was the first song Darren ever wrote on his own (he was in Dublin, with a guitar, in case you were wondering). A real journey of a track, chronicling post-separation depression > acceptance, with a faltering electro finish... Beautiful.

10. WHERE YOU WANTED TO BE: Darren opening his heart by performing this non-album rarity, which he openly admitted was written about his former band-mate Daniel Jones. Having only previously heard this song on YouTube, this was the only song of the night I wasn't able to sing along to ("BAD FAN!!"), but it was still a truly overwhelming experience.
11. I KNEW I LOVED YOU/TRULY MADLY DEEPLY: Rounding off the acousitc portion were two U.S. #1 hits for the price of one - A.K.A. "The wedding song" medley, which was originally performed in this gestalt form on the 2002 Too Close For Comfort Tour. 'Gestalt' means two entities brought- oh, go look it up yourselves, you're online!!
12. ON THE VERGE OF SOMETHING WONDERFUL: Anyone lulled into a dream-like state of ballad overdose (or was it too much drink? Yes, I'm talking to you, madam, who fainted in the front row and needed assistance...) were surely rocked back to their senses with this drum-fuelled electro-pop smash from Delicate. Surprisingly, this was only the second - and, as it transpired, final - track Darren performed from his most recent (non-side project) album.
13. INSATIABLE: Mixing his biggest solo hit with Madonna's "La Isla Bonita" was - personally - the only misstep of the entire performance. True, morphing the erotic ballad into a Spanish-hued party song was more in-keeping with the post-"Verge" mood, but I'm not overly keen on that particular Madge song, and Insatiable is a classic. Leave it alone, Darren. And the song! *boom tish* 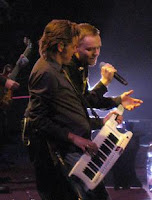 14. I WANT YOU: Producer/co-writer/instrumentalist/general all-rounder Mr. Justin Shave (pictured with Darren on the Time Machine Tour) was given a chance to shine - not that he was ever dull in his sparkly t-shirt and funky shades - with a head-mic, key-tar (which decade are we seeing in?! ;-b) and the honour of singing 'robo' backing vox in this "Tears Of Pearls/Violet" Mix. So technically a medley... kinda. Oh, who cares when the musak is this freakin' phunkay?!

15. POP!ULAR: The final song of the main set, and there wasn't a hint of fatigue as Darren (he's 37, fact fans) continued the highly energetic electro-funk vein of "I Want You" with Tension's lead single (and humorous pop at the 'music' industry), given a 90's Black Box make-over with the music to "Ride On Time". Don't even pretend you don't all know it!!

I would crack on with the encore, but I need a breather and a costume change (this leather is beginning to chafe, and I'm parched for a Chica Cherry Cola). Until #4, CRaB-fans! :-D
Created by ~ CR@B Howard ~ at 16:29