"Feeeeeeeeeeeeeed me, Dougray!" It's the Big City Of Horrors 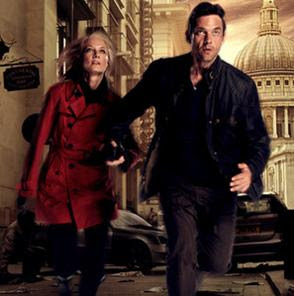 When I found out that the BBC were remaking the classic 1962 horror flick as part of their 2009 festive line-up, my interest was piqued. Not because I'm a huge fan of the original (truth me told I haven't ever seen it), but because the BBC were investing a lot of time, talent and licence-payer's mulah into making an adult sci-fi drama which doesn't rely upon out-of-place S-bombs and OTT sexual innuendo to achieve its 15-rating (coughTorchwoodcough). "And it's being penned by a man whose credits include ER and Law & Order?" Recorder set!

Tonight I finally sat down to catch up on the first 90 minutes of this 2-part 3-hour beast. And what can I say but "Come back Captain Jack, all is forgiven!" On a positive note, the production value was high (it didn't look like it was filmed in a studio, as is often the BBC style), the stars were numerable and - for the most part - fairly high-profile (if all playing rigidly to type), and events kicked off in a similar vein to US favourites Lost and FlashForward with a major(ly expensive) disaster rocking the status quo and making a real mess of the city.
So far, so impressive. If not exactly original.
Then things take a post-apocalyptic turn for the hilarious. While the pocket of "sighted" survivors (those not blinded by the aforementioned status quo-rocking disaster) try to make sense of what has befallen their countrymen and either band together or act snidely deceptive (that's your cue, Mr Izzard), they also have to deal with an enemy far greater than a panicked population...
Plants.
Bred in top secret high-tech farms as a combative to global warming (which, you'll agree, is a plus), the eponymous Triffids are violent (!), meat-eating (!!), mobile (!!!) plants which hunt out food (human flesh) when not supplied with root service (this is a rather hefty minus - but a great excuse for a cracking flora pun). Why settle for sunlight and water when you can gorge on an ungoggled human eyeball?! 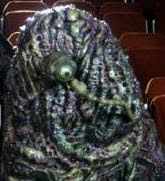 Sounds like a monstrously wicked horror, doesn't it? But here lies the root (yep, I used the same word to pun again; leaf me alone!!) of the problem: for all the recent advancements in CGI, Triffids on the move still look like a guy shuffling in a compost suit (and bring to mind a certain intentionally-shoddy Pleasure GELF from Red Dwarf. See picture, laugh), undoing all of the impressive work that went into the opening set-piece and making fools of the characters who are running from their stalk-ers. Scared? No, me neither. Disappointed? You betcha. Tickled? Like a naked guy in a chicken suit.