2010 marks the First Annual CR@Bby Awards. A Celebration of Re@l Brilliance, according to... me. Anybody who is anybody who knows anybody who follows anybody on twitter wants a Golden CR@B - they are the most sought after awards in Hollywoodland.* The Oscars are so 2000-and-late. Don't believe me or Fergie? Judge for yourselves:

Cuba Gooding Jnr. was so freakin' ecstatic after his 1997 Oscar for Jerry Maguire that he thought he had won a CR@Bby - and he was positively ravenous for some sea food... 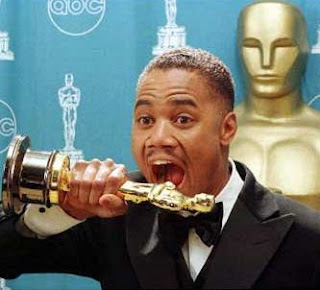 Ouch! Thankfully, GORT was a fully qualified dentist.
At the following bash, Gwyneth Paltrow was so upset that her Academy Award wasn't a CR@Bby that she tried to strangle poor Oscar in a teary rage. 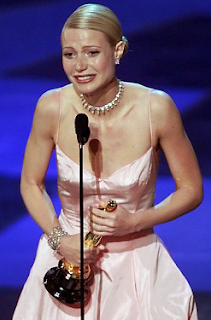 Two years later, she really wanted to name her daughter CR@B Apple, but Chris Martin objected, because he prefers Golden Delicious. The fool.

Halle was so Berry angry in 2002 that she tried to halt the Oscars telecast. 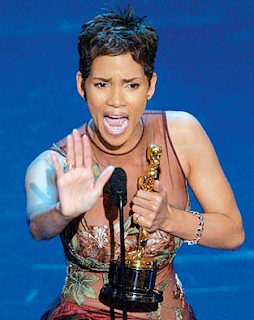 Pity she didn't do the same when making Catwoman, hey?

So there you have it, folks. Proof if proof were needed that the stars are utterly mad for CR@B. Stay tuned to crabhoward.blogspot.com for the full rundown of contenders and winners of this years' CR@Bbies, coming soon. Hankies not provided, Halle.

* Probably because they don't exist, but shhhh - let Jack Black keep hunting, at least until he loses the urge to make Be Kind Rewind 2 (*shudder*).