Not Persuaded To Laugh 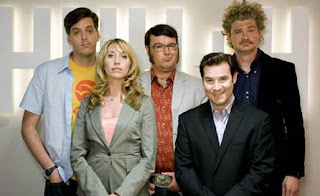 Picture the scene: you're at work/the pub/a picnic, nattering away the hours with colleagues/mates/some family whose al fresco luncheon you've just gatecrashed, when conversation inevitably turns to the weeks' TV. Invariably, no matter how clever/entertaining/cool the programme being dissected by this informal focus group is, some arrogant so-and-so will spew forth the hyperbolic claim: "I could write a better show than that". Well, I generally think to myself (when it isn't I who has made said claim), what the 'eck are you doing wasting your days in Morrisons/the Hungry Horse/this fly-infested field in the Lake District, mi laddo? Get back on your laptop and email this hallowed, mould-breaking script to the BBC, post haste!

The reason they are wasting their days in Morrisons/the Hungry Horse/this fly-infested field in the Lake District, 99.9999999999% of the time, is because they HAVEN'T written a hallowed, mould-breaking script at all (in fact, they don't even have a laptop), they were merely bragging to impress the girl in the bakery/the barmaid in the low-cut top/stop the father of the family from calling the police before they've finished their scotch egg. The other 0.00000000001% of the time they were drunk/drunk/drunk.

Tonight I watched the first episode of a new BBC sitcom called The Persuasionists, starring a throng of recognisable comics from recent TV projects (I won't name and shame them, but you can see them in the pic above). I went into the programme with high hopes, not only because of the cast, but because it had been advertised and hyped as one of the big new comedies of the new year. A sure-fire hit, surely?

29 minutes later I switched off the TV, shaking my head and powerless to stop my lips from uttering the cliched phrase: "I could write a better show than that". I wasn't even being immodest, I KNOW I could write a funnier comedy than that. I'd even go as far as to say I HAVE written a funnier comedy than that, but you'll have to take my word for that, for now (it is currently being judged in the Sitcom Mission competition).

The Persuasionists was cluttered with hideous, stereotypical, borderline racist characters who were totally untrue to life, doing stupid, outrageous, unfathomable things just because somebody with a low-brow sense of humour may giggle as a boss throws a bread bin at his failing underling, or a “foreign colleague” uses a giant pencil to seduce random girls by making a lot of poor taste cock jokes. Even the nicest/tamest/most boring character is a lazy no-hoper. How ironic that a comedy based around advertisers attempting to sell absolute tat to gullible saps, made such a fine mess of persuading me to give this shit-com another chance. Clearly some tat stinks worse than a quart of out-of-date cockney cheddar.

My question is this: WHO at the Beeb had the bright idea of not only resurrecting this 2-year-old dud from the annals of TV history (it first piloted in 2007, with Chris “A.J. Rimmer” Barrie on board; he was wise to jump ship), but also thought it worthy of a promotion from digital BBC Three to terrestrial BBC 2*?!! Was it the same genius who turned down the chance to screen a new series of Red Dwarf, but thought Big Top was comedy gold?

Now, where's that scotch egg I was rudely prevented from finishing?


* I could make a biting joke about scum rising – given that the pilot was originally named The Scum Also Rises – but that would involve be going back over my blog and editing in that titbit of information. Can I be arsed? Does the fact you're reading a post script answer your question?
Created by ~ CR@B Howard ~ at 15:26