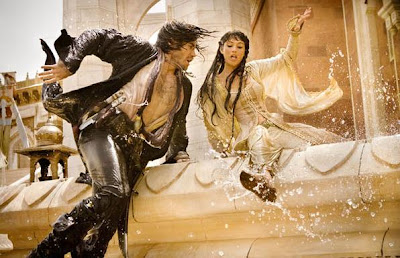 Another media-hopping blockbuster videogame adaptation from the director of Harry Potter and the Goblet of Fire, produced by the man behind Pirates of the Caribbean and looking distinctly Mummy-like in tone? To say I went into Prince of Persia: The Sands of Time open-minded but hardly optimistic of anything approaching originality, is an understatement. And yet, upon leaving the cinema, I had to confess that I thoroughly enjoyed this swiftly-paced medieval fantasy adventure; even if you have to take hulked-up leading man Jake Gyllenhaal’s uneven accent with a giant pinch of, err, sand…

The man that was Donnie Darko is now the adopted and energetic Prince Dastan (an absolute spit of his pixelated counterpart), a former street urchin with a penchant for basejumping and disobeying his older brother’s orders regarding an attack on Princess Tamina’s (Gemma Arteton, who needn’t have bothered changed out of her Clash of the Titans wardrobe) innocent city. Framed for his father – the King’s (Ronald Pickup) – murder, Dastan and the cagey Tamina go on the run to prove his innocence and uncover the truth behind the dastardly plot to steal the mystical Dagger of Time and rule the world…

Opening on a map of the ancient world, overlaid with grandiose “A long time ago in lands far away” narration and an Arabian-stringed score from Harry Gregson-Williams, I feared cliché overload, however as the energetic action picks up and you aren’t sure who to trust, the film bucks formula and genuinely surprises on a number of occasions, twisting and turning like a snake up your sleeve. All of the supporting cast are a joy to watch, particularly Richard Coupling Coyle as Prince Tas, who really steps up well from sitcom funnyman, shadowy Ben Kinsley as nobleman Uncle Nizam, and a truly hilarious turn from an almost recognisable Alfred Molina as the likeable scoundrel Sheik Amar, who makes his money from racing ostriches!

Sure, some of the dialogue is a touch ropey and the screenplay is crammed with repeated exposition, but what do you expect from a film about a mystical dagger with the godly ability to rewind time? It hardly speaks for itself! At other times the script positively zings with likeable banter between the eye-candy leads, and Molina keeps the laughs coming simply by "talking too much" as his frustration mounts and he gets unwillingly dragged along on the dangerous mission.

The zooming and swooping camerawork, as well as an irritating application of slow-motion to add a sense of the dramatic to the swashbuckling battle scenes, do take some getting used to, but I guess they are merely a by-product of the film’s flashy, videogame origins. Thankfully both techniques are not used excessively and you are granted a good gawp at the gorgeous landscapes and ancient bazaars. The film also doesn’t overindulge on CGI or ludicrously monstrous foes (Stephen Sommers, take note), aside from the impressive depiction of the dagger’s released sand swirling, magicking and reversing the flow of time. It’s a refreshingly muted decision for a big-money blockbuster, allowing for the jamboree of characters to shine through, provided you can get past Jake’s dubious enunciation…


CR@B Verdict: Prince of Persia is a startling jewel in the rough landscape of videogame adaps. It is harmless, easily accessible popcorn fun, even to the generation who think a platformer is a type of shoe and a joystick is, well, very rude indeed…
****
Created by ~ CR@B Howard ~ at 09:25