Greetings most patient CR@B fans! My tardiness with recent Doctor Who reviews hasn’t been through sheer laziness, cross my claws and hope to fry! A busy period at work followed by a holiday in Cyprus (oooh, get me!) has left me trailing behind the UK transmission dates somewhat (hey, a CR@B’s gotta get some downtime!!), so in the interest of getting back up to speed, here are three slim-line reviews of episodes 5.6, 5.7 and 5.8… 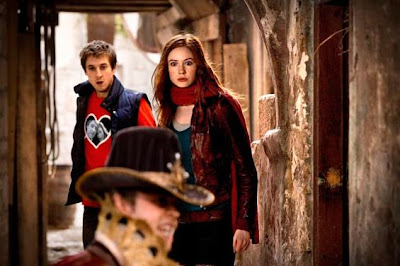 Following Amy’s (Karen Gillan) impassioned pass at the Doctor (Matt Smith) at the close of “Flesh and Stone”, the Time Lord turned Cupid in “The Vampires of Venice” by popping out of a giant cake and whisking Amy’s estranged earth-bound fiancé Rory (Arthur Darvill) away from his Stag do and on a romance-rekindling date to Venice . In 1580. “It’s this or tokens!” quipped the Doctor, again on fine bantering form in another witty, humorous, historical romp with added, err, bite. Well this episode was written by the creator of ace supernatural drama Being Human, so what did you expect: Gondolas and Piazzas?

You see, “Venice” in the sixteenth century – in actuality Croatia in 2010, providing a marvellously believable (and cheaper) stand in – is experiencing a problem with a “plague”, transforming the gifted female students of Rosanna Calvierri’s (Helen McCrory) exclusive “school” into light-opposed, fang-sprouting, blood-loving “vampires”. If you think I’m overusing the punctuation marks then that’s because the whole operation is a perception-filter aided cover for a race of “fish people from space”, on the run through time from their dying world. Their “masterful” plan? To breed the transformed gills– sorry, girls, with the surviving males of their scaly species, who are waiting impatiently in the waters of Venice , before flooding the city so they may thrive again.

It was (intentionally?) anti-climatic and sniggersome that the Doctor was able to disable said water-raising device by flicking a tiny switch atop a rooftop, and third wheel Rory’s (temporary?) reintroduction was suitably awkward: his one-upmanship repartee with the Doctor providing more of a spark than his lifeless relationship with love Amy, but then that is clearly the point. Overall, “The Vampires of Venice” [sic] was a rollicking fun - if throwaway - old-school caper (swashbuckling sword-and-broom fight included), with a zinging script infusing an age-old narrative structure (aliens disguised as humans to con us into saving their race? *yawn*) with life. 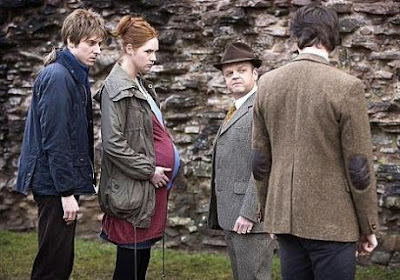 I will get straight to the point: this was – thus far – the least successful episode of series five. Flawed, corny and disengaging – and this is coming from somebody who gave the derided “Victory of the Daleks” four stars out of five!! My disappointment at “Amy's Choice” was further aggravated given the calibre of the writer (Simon Nye of Men Behaving Badly fame), the intrigue and anticipation garnered by the quirky trailer at the tail end of “The Vampires of Venice”, and the unforgivable waste of such a high-profile guest star. Infamous lead Toby “Truman Capote” Jones was perfectly cast as the impish and mischievous Dream Lord, but let down by a story which, even after the psyche-twist at the climax, never justified his character or gave him any acceptable cause or motivation whatsoever. He was a knock-off “Q” to the Doctor's Jean Luc, if you will.

Predominantly a character piece dedicated to attempting to validate the doubtful romance between Amy and Rory, “Amy's Choice” saw the travelling trio tossed between the rural community of Leadworth five years in the future, and a disabled TARDIS careening helplessly towards a cold star. Have Rory and a heavily pregnant Amy been living happily-married in a sleepy rural village which is secretly under threat from aliens disguised as curtain-twitching octogenarians, or is it a shared dream? Is the TARDIS doomed to crash and freeze, or is this the communal dream and Leadworth a dull reality? Only the Dream Lord knows, and he isn't telling. What a tease...

I concur that it was a fantastically oddball, Freudian-skirting premise; but the execution was so hokey and pocked with holes as to totally negate my interest. For instance: surely the existence-flitting trio could deduce that the future on Earth isn't reality by the fact that they haven't lived for five whole years?! Furthermore, I failed to believe in the character development drilled into us, even if the episode's dialogue was decently humorous (particularly the remark about the “elephant in the room”). But that was the very least we should have expected from a seasoned sitcom writer. 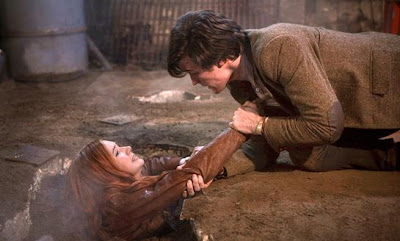 A two-part story set in a sleepy Welsh village where 2020 looks remarkably similar to the present day? This'll be a cheap-to-film mid-season filler, then, thought I, cynically, upon reading the opening title card. After last week's disappointing dud – and a trailer which failed to grip me – I feared it would be “onwards and downwards” (to ironically quote from the script) for the rest of this highly anticipated new series. Thankfully, “The Hungry Earth” struck gold (albeit in a slow-burning fashion) and made a fool of me for judging an episode from a 30 second tease.

Once you are over the frankly ludicrous scenario that an operation as grand and spectacular as the world's deepest tunnelling drill is being run by a crew of just 3 people (!), you can enjoy this tale of disgruntled lizard-tongued reptilian warriors, the Silurian (making their first Who appearance since the 1980's), reawakened by Wale’s subterranean drilling and remerging to reclaim “their” planet from the “apes” who became the dominant species. 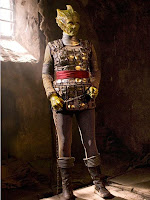 The episode was heavy on build-up – the Homo Reptilia don’t even turn up until well over half way through – and perhaps felt a tad modest compared to more exciting recent jaunts, but a number of neat and well-executed details elevated it above talky groundwork for next week’s purportedly larger-scale conclusion: the Doctor's lack of parental experience in letting schoolboy Elliot (Samuel Davis) walk off alone amid increasing danger highlighted the Time Lord's inhuman weakness; the quarantined town being pitched in premature darkness due to a domed force shield was a nicely disorientating touch; and Silurian Alaya's (Neve McIntosh) silhouette stalking Elliot in the church graveyard was genuinely haunting.

It was an interesting move to keep Amy out of the action for so long in “The Hungry Earth”, and show how her 'boys' handled a situation where her life is at risk, cocooned underground at the mercy of a Silurian surgeon. But in keeping with the episode’s low-key tone, it was a shame that we saw so little of the heavily made-up Bossk-a-likes: the tribesmen of the uprising scouting party scarper the minute female Alaya is captured (and they call themselves warriors?!).

Furthermore, the (human) guest cast – in essence just one small-town family – did little but act as puppets to the Doctor’s stream of orders. Worryingly, he too would have been completely screwed (geddit?) were it not for his multi-purpose sonic screwdriver, which offered a quick-fix solution far too often (though it doesn’t work on un-sticking expanded wooden doors, which was a humorous line in a mainly straight-laced script). But these are minor niggles in an otherwise enjoyable escapade which is sure to get far more epic in next week’s “Cold Blood”.