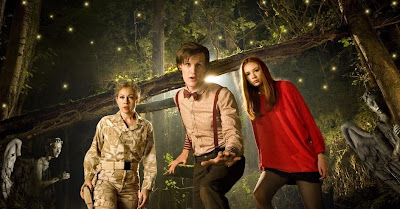 [“SPOILERS!”] Part two of this highly-anticipated Weeping Angels story was another top notch slice of prime, sharply written entertainment, topped off with a brave, adult edge. “Flesh and Stone” began by turning last week's cliffhanger on its head. Literally. Playing with the gravity field on the spaceship Byzantium, the Doctor's (Matt Smith) diminishing team are able to allude the ever-strengthening army of Angels and enter the bowels of the crashed craft, with the stony foes hot on their heels and hungry for... oxygen. Yep, the Angels need to breathe, too, granting us the pleasure of a fabulous Oxygen Factory set (“Trees... with technology!”), which made a pleasant and exotic change from rock and steel.

Following her terrifying trailer encounter with an Angel in “The Time of Angels”, Amy (Karen Gillan) has picked up an unnerving habit of counting down, which is a simple but chilling device courtesy of the Angel currently 'living' inside her mind, ratcheting up the episode's tension, especially because you aren't even aware it's a countdown until she's nearly half way to zero. The Doctor's shockingly obtuse diagnosis that Amy is dying is a fantastic look inside his alien mind, especially when it is juxtaposed with a tender, comforting word and kiss on the forehead for his inflicted companion.

Some fans may complain that the resolution (Amy must close her eyes to 'pause' the Angel within and pretend to see while she walks between the encroaching enemies) damages the Angel's formerly indomitable reputation (not to mention the show's internal logic, but, hey this is fantasy), but they still make fearsome foes. The fact they are making Amy count down “for fun” while they manically cackle at their victims demonstrates their dominance over - and disregard for - humans, and the scene when he finally see them move is chillingly executed. 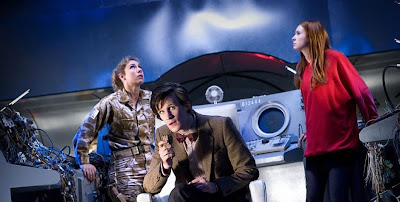 The mysterious crack which has plagued Amy since her youth and trailed the travelling companions since “The Eleventh Hour” is dealt with much earlier in the run than many probably expected (Who story arcs usually stretch the entire 13 episode series), the burst of “time energy” – the cause of many a forgetful moment due to its ability to rewrite and unwrite time; particularly effective when the cleric's deny their fellow commando's existence – sealing itself shut on a diet of Weeping Angels. But as one arc closes, another arc opens in the form of the eight digit base code for the universe, but more about that later.

Despite delivering a cryptic sneek preview to the Doctor about a future meeting when “Pandorica opens” (the third time this event has been mentioned in new Who), I couldn't help feeling that River Song's (Alex Kingston) impact upon this episode was somewhat decreased after her bombastic return in a blaze of banter last week. At times she seemed little more than a backseat apprentice to the master in “Flesh and Bone” (the times that the Doctor lost his rag with her were delivered with aplomb from Smith), her only plot point of note being Father 'Bishop' Octavian's (Iain Glen) revelation that River is an untrustworthy murderer in his custody, her objective to achieve her mission and earn a pardon. There is a strong hint that her (future) victim is our dear Doctor, but this seems a far too simplistic outcome to this time flux murder mystery.

I mentioned in my review of “The Time of Angels” that last week's episode felt like there was a distinct break in proceedings which brought together two disparate story threads (River Song's reintroduction > the Maze of the Dead), and the same is true here. With the Weeping Angels being caught out by the “gravity of the situation” (guffaw), the final ten minutes are dedicated to a rather surprising, tone-shifting epilogue back at Amy's house, where she finally admits her desire for the Doc, coming onto him in rather an extreme fashion – particularly considering the early timeslot and young demographic tuning in. Promiscuous girl, indeed. Okay, so nothing overtly sexual was spelled out, but I'm sure some puritan cages were rattled as Amy lay on her bed expecting, well, you know... The Doctor dutifully declines (is he mad?!!) – something about a 900 year age gap, oh, and him being an alien – but it does spark his realisation that the aforementioned base code of the universe is interlinked with Amy's timeline – and ours – 26/06/2010 is the air date of the series finale. Handy, that.


CR@B Verdict: A thrilling if flawed pay-off packed with action, frights, emotion and an unexpected injection of passion. Yep, in Doctor Who!! Perhaps “Flesh and Bone(r)” would have been a more apt title...? ;-)
****
Created by ~ CR@B Howard ~ at 07:09