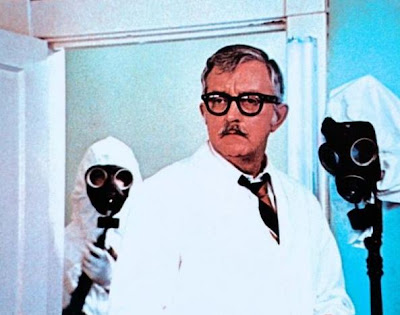 A couple of burning bodies, a knitting-needle attack and a totally unnecessary incestuous rape (best leave that one there...) cannot hide the fact that George A. Romero's original stab at The Crazies (1973) is rather heavy on talk and light on craziness. Indeed, there are so few on-screen examples of unprovoked violence from the biologically-infected citizens of Evans City, Pennslyvania, that you feel absolutely no threat from their slightly spaced-out mood swings. In contrast, the men in uniform brought in to keep the town under control are a shouty, blundering and terrifying mess of crossed wires, macho bravado and total ignorance who couldn't take charge of a bustling school hall. Okay, point taken: the army are the enemy here, but in truth, the filmmakers are hardly innocent either.

Romero wastes no time in getting stuck into an explosive opening set-piece – the first case of infection sees a man murder his wife and set fire to his house while his children are inside – but following this dramatic introduction, the action then slows to a crawl as the clueless but commanding military unit move into the quarantined town and round up the unsuspecting citizens in the most undignified manner. All of the exposition is spoken rather than shown (the catalytic, virus-carrying weapon “Trixie” was aboard a plane which crashed into a river, infecting the water supply) and the majority of the violence is people being gunned down. Repeatedly. Which gets old rather quickly and only aids to highlight the lack of a budget for this lo-fi B-movie. 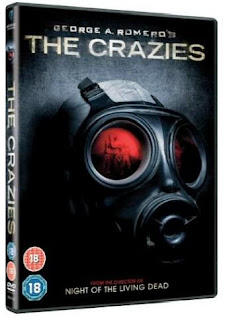 I am usually very forgiving when it comes to my favourite cult horror director balancing allegorical ideas with pitiful resources (the dodgy CGI in Survival of the Dead (2009), for instance), alas, a lack of innovative, realistic or frightening effects isn't the only issue I have with The Crazies. All the neccessary ingredients are present – social commentary, fake blood, impending apocalypse, faceless enemy – but they have been mixed horrendously into an unsuccessful and riotous hodge-podge of a “horror” which fails to live up to its potential. The Crazies is neither scary nor thought provoking, simply amateurish, and it is no surprise that it is one of the legendary auteur's lesser known works.

There is never any tension in the linear, undynamic plot, the script jumps about so often that you never have time to care for any of the lead characters, and all the big plot points (the realisation that the virus has spread to the next town, for example) are wasted by being revealed in bloated conversations. It pains me to type such blasphemy, but the 2010 Breck Eisner remake (reviewed hither) is actually an improvement on this rough draft of an original, even if the zombie-connection Romero is famous for is played up to the hilt in the slick, modern-day frightener.


CR@B Verdict: Hampered by a muddled script and non-existent budget, I sniggered more than I was shocked by this so-called horror. The Crazies has an interesting, issue-laden concept, but it is poorly realised. Sorry George, but you will have your Day.
**
Created by ~ CR@B Howard ~ at 14:26