The Lord of the 300 Mummies: Return of the Kraken 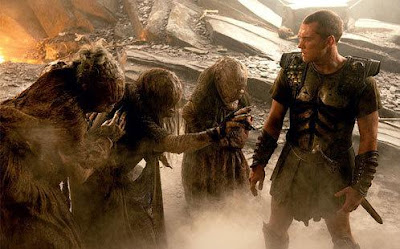 Well the good news is it isn’t as disastrously bad as the critics make out. The bad news is it still isn’t great. Put it this way: I can’t see Clash 2010 being as fondly remembered as Clash 1981 in 30 years time. But then, watching the original in recent weeks (it’s all about the research at The CR@B Shack), I failed to see why that is so fondly remembered either... Back to the present, and heeding prior warning I avoided the allegedly abysmal 3D ‘upgrade’ and stuck to good ole’ fashioned two dimensional viewing. I couldn’t pinpoint any scenes which would have benefited from an added dimension – but I suppose that’s because the film was never written or shot with 3D in mind…

Tweaking the intricacies of the original’s plot but still keeping – roughly – within the grandiose guidelines (though being truly flippant with Greek mythology), Louis Leterrier’s frenetic update sees demi-god-come-fisherman-come-mankind’s-saviour Perseus (Sam Worthington) leading a small army of warriors against a myriad of giant scorpions, deformed monsters (Jason Flemming as Calibos), sightless witches (see pic, above), the snake-haired Medusa and the beastly, sea-dwelling Kraken. Their quest is to evade the sacrifice of the Princess Andromeda (Alexa Davalos) and save the city of Argos, which has fallen foul of the god’s wrath after its inhabitants felled a statue of mighty Zeus (Liam Neeson, donning the shiniest of shiny armour).

Despite forming half of the battle, the Olympian god’s are – for the most part – relegated to cameo roles. For instance, I’m not even sure if Poseidon (played, according to imdb.com, by Danny Heuston!!) featured at all, because aside from Zeus and Hades, all the other gods are about as useful as marble statues; bland, speechless forms void of character that are ushered away the minute anything remotely interesting kicks off. Ralph Fiennes does well to embody slimy evil in the devilish and cursed character of Hades, but quite why a powerful and immortal god hobbles around like an aching octogenarian in a raggedy cloak is beyond me? Yes, I get that he has been tricked by Zeus into lording over the underworld, but if he has the power to apparate, fly and command the Kraken, then surely he can magic himself up a new outfit befitting a god? 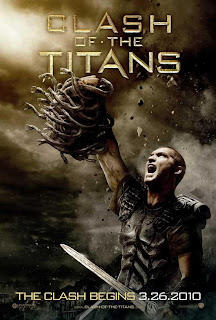 A further niggle I have is the sheer pettiness of the god’s, who really should know better. With great power comes great responsibility – and a truly malevolence idea of 'appropriate' vengeance, apparently. I was especially infuriated at the epilogue when Zeus downplayed the entire saga and the deaths of thousands of innocent Argos civilians with a whimsical click of his fingers and cheeky smirk – if things were that easy to undo, then why put man through such pain and misery? Additionally, having ageless Io (Gemma Arteton) tag along as Perseus’s guardian-come-love-interest was an unnecessary alteration to the story (in the original he fell for Andromeda and went on to become king); her only purpose being narration and exposition.

Stylistically, the film struggles to find a unique aesthetic. It looks epic, but only because the sweeping mountainous landscapes recall The Lord of the Rings’s New Zealand locales, the roaming Argos army brings to mind the macho Spartan 300, the neon-blue-eyed, bark-skinned Djinn reek of The Mummy and the atrociously-computerised Medusa looks like the Scorpion King’s dead-eyed sister – but at least Stephen Sommers’s attempt at human-animal CGI characterisation has the excuse that it was rendered nearly a decade ago. As icing on the derivative cake, Titans had 3D (unnecessarily and unsuccessfully) tacked on in post-production simply to make a few extra bucks off the back of Avatar’s romping worldwide success. So, a wholly unoriginal remake – perhaps Cash-in of the Titans would have been a more fitting title?


CR@B Verdict: Swords, sandals, serpents, scorpions, sorcery and CGI – Clash of the Titans throws a lot at the screen in its decidedly un-epic running time, yet it still feels as hollow as a Djinn’s torso. A fun film, if flawed and ultimately forgettable.
***
Created by ~ CR@B Howard ~ at 10:15