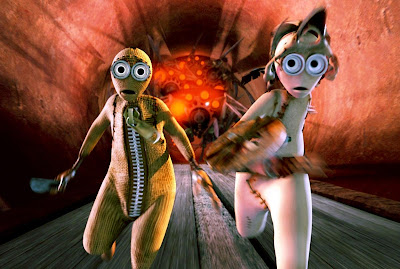 Shane Acker should be commended for effectively auteuring 9 – his first feature film – expanding and padding out his 2005 Academy Award-nominated short film of the same name, which, amazingly, he made for his college dissertation. The story of a sapient rag doll ‘awakening’ on a post-apocalyptic Earth where mankind has been wiped out by rampaging cognisant machines and a group of nine “Stitchpunks” (think Sackboy in PS3's Little Big Planet) are all that remains, sticks very closely to Acker's silent 10 minute short, both aesthetically and thematically, which is perhaps why the computer animated film looks incredible (it is obvious why Tim Burton took the role of producer; his kooky, gothic style a clear inspiration) but feels weak in compelling plot progression over its already trim runtime.

Equipped with a mysterious talisman left by the scientist (Alan Oppenheimer) who created and indebted them with a portion of his soul, 9 (Elijah Wood) joins, impacts and inspires the band of miniature survivors led by the cagey and cowardly 1 (Christopher Plummer) in their battle against the corrupted metallic menaces who devastated the planet. It's a minor point, but I personally found the characters denotation as numbers to be quite irritating after a while, even if their individual personalities and clear-cut roles did shine through (bodyguard, warrior, artist, engineer, inventor, explorer, etc.). It would have been easier for me to engage with the animate inanimates were they given names, although I understand why they were not: they are each part of a greater whole. 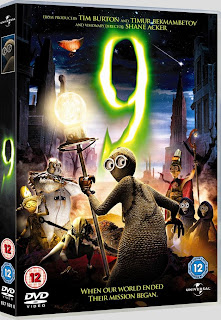 The film wears its simple message of community, humanity and hope against the odds blatantly on its sleeve (literally: it reveals them on the back cover synopsis and reiterates them in onscreen dialogue) and, because of this, I cannot say I was ever shocked, surprised or awestruck by any aspect of the linear story. Even the initial faux-conclusion following the supposed victory over the soul-sucking Fabrication Machine was obviously not the end, occurring after only 55 minutes.

I was also left numb following the "optimistic" epilogue: the talisman is used to release the souls of the five 'dead' Stitchpunks from the belly of the Fabrication Machine. But rather than bringing them back to life, the freed apparitions merely wave goodbye to their surviving friends and float to the heavens, causing it to precipitate a neon-green-tinged rain. So, life isn't dead on Earth after all, but how am I supposed to be comforted by this when over half of the main characters were killed off to get to this evolutionary conclusion?!


CR@B Verdict: A promising debut from the young director, showcasing a wealth of imagination and visual flair. Somewhat lacking in plot development, 9 is nonetheless a tantalising aesthetic achievement.
***
Created by ~ CR@B Howard ~ at 21:37