No Goats, No Glory 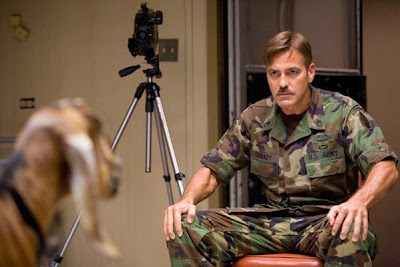 Purportedly based on true events (but clearly given a healthy creative spruce), this high concept comedy sees small town reporter Bob Wilton (Ewan McGregor) hit rock bottom before deciding to head to Kuwait as a war journalist and land a totally unexpected exclusive that nobody is likely to believe. Equally, some audiences may struggle with The Men Who Stare At Goats’ kooky New Age philosophy and paranormal conceit, but if you open your mind you will enjoy a bright and outlandish film. And no, I am not suggesting you get high, dude…

On his travels Bob meets Special Forces operator Lyn Cassady (George Clooney), who claims he was part of a American training unit dubbed the “New Earth Army” founded by Bill Django (Jeff Bridges, channelling his inner hippy once more) some 30 years ago. The unit focused on developing psychic ‘super’ powers in its soldiers, including the seemingly inane title-alluding ability to kill a goat just by staring at it. Believing it is fate that they have met, Lyn lets Bob accompany him on a dessert-bound mission while feeding him snippets of the hippy-esque unit and his rivalry with fellow recruit, the more darkly-minded Larry Hopper (Kevin Spacey; an unabashed riot).

Tonally reminiscent of the Coen brother’s quirky romp Burn After Reading – which is no bad thing – and split between wacky training flashbacks from the 1970s and 80s, and the early noughties-set Iraq mission narrative (and doing a very authentic job of turning back the years on its middle-aged stars), The Men Who Stare At Goats can at times feel like a rambling hotchpotch of scenes featuring an ever-increasing ensemble cast (including a shockingly old looking Robert Patrick). However, the film is held together with some superbly witty and self-aware dialogue which never fails to illicit a smile (Ewan “Obi-Wan” McGregor claiming ignorance of what a Jedi is, being a prime example), even if the conclusion is somewhat underwhelming.


CR@B Verdict: A meandering plot and slightly anticlimactic ending shouldn’t dissuade you, Goats is chockfull of sharply written, witty dialogue, superbly acted by a band of established stars with their tongues firmly in cheek.
***.5
Created by ~ CR@B Howard ~ at 09:33