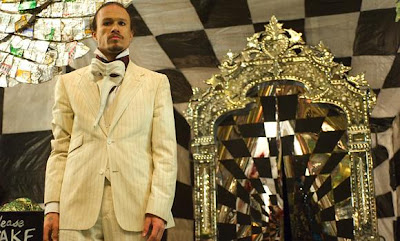 Fated to forever be remembered as “Heath Ledger’s Last Film”, The Imaginarium of Doctor Parnassus is – as my lengthy and ludicrous tongue-twister of a title suggests – a wonderfully exuberant and surreal head-trip of a movie, though definitely not to everybody’s taste. 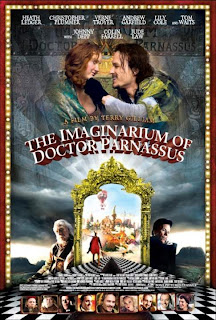 Christopher Plummer plays the immortal and eponymous doc, cursed to travel modern-day London with his oddball circus troupe (Verne Troyer and Andrew Garfield) in order to lure five souls to enter the titular Imaginarium to win a bet with Mr. Nick (Tom Waits) and not forfeit his daughter, Valentina (Lily Cole), to the suave-but-snide devil. *Breathe* Ledger plays suicidal charity man Tony, struggling to remember his own dark past while falling for Valentina and being chased by a gang of angry Russian heavies...

The plot is twistingly complex and does get a little bogged down under its own weight towards the end, but this is otherwise a magically original film with exquisitely hallucinogenic CGI as the Old World meets the New World and they both have a riot. Even drafting in big-name stars to complete Ledger’s unfinished role (Johnny Depp, Colin Farrell and Jude Law play reflections of Tony inside the Imaginarium) doesn’t seem out of place in this distinctively outlandish tale typical of Python alumni Gilliam’s vivid imagination. As far as recent effects-heavy, portal-hopping adventures go, Wonderland pales into comparison: Parnassus has Burton's madcap Alice beat at its own game.


CR@B Verdict: Bold, inventive and strikingly original: The Imaginarium of Doctor Parnassus is by far co-writer and director Terry Gilliam’s best film in years and a fine tribute to its late star.
****
Created by ~ CR@B Howard ~ at 10:23