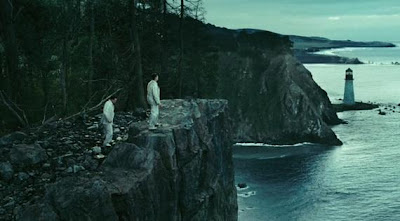 When is a twist not a twist? When Hollywood has employed it so many times it becomes a predictable cliché, embedded in the mainstream cinema-going public's consciousness like a shared reoccuring dream. This is the problem which ultimately lets down the climax of Martin Scorsese’s '50s-set, noir-tinged Shutter Island, an otherwise impressive adaptation of Dennis Lehane’s 2003 psychological thriller set on the remote eponymous isle. 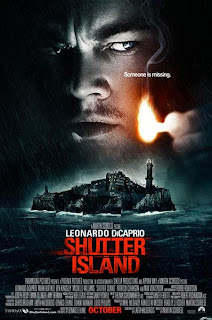 Marty’s muse Leonardo DiCaprio plays US Marshall Teddy Daniels, ferry-bound to a hospital for the criminally insane following an inexplicable breakout by one of its dangerously unhinged patients (Emily Mortimer, effectively wide-eyed). However, this isn’t the only mystery which needs deciphering as storms rage, conspiracies amount, stories intertwine and even the doctors (led by Ben Kingsley and Max von Sydow) and Teddy’s new partner, Chuck Aule (Mark Ruffalo), are brought under suspicion. Who can you trust when you can’t even trust the professionals?

Scorsese’s direction is assured if typically old fashioned, although Teddy’s dissonant dream sequences featuring his tragic late wife (Michelle Williams) are effectively eerie. The drama is well played, particularly by an edgy and haunted DiCaprio, and the purposefully dreary Alcatraz-esque location is bleakly atmospheric; it’s timbre enhanced by the perpetually ominous score. Unfortunately, Shutter Island's overly elaborate, multi-layered plot will lead you on a nightmarish - and long-winded - journey you’re all too familiar with, and it would have benefitted from an infection of originality – or being administered a decade earlier. As it stands it feels like an expensive punchline to a bad joke.


CR@B Verdict: Jarring, dizzying and evocative, Shutter Island is, for the most part, an accomplished work – but when a Martin Scorsese film draws thematic parallels with the appalling Joel Schumacher headache The Number 23, you have to worry about exactly who you're watching...
***
Created by ~ CR@B Howard ~ at 12:35