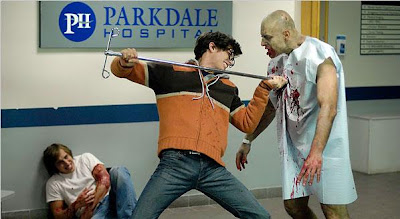 Unlike Land, Diary boasts no big name stars (although a number of high-profile actors and directors do make voice-only cameos as radio newscasters) and instead of the glossy digital photography of its forebearer, Diary is shot through the lens of a handheld camcorder (or, at least, that is the effect). It is edited together from footage being 'shot' by Jason Creed (Josh Close) as the meta-documentary “The Death of Death”, after filming of his student horror film is interrupted by the news of the dead returning to life. This audio-visual diary then records the struggles of Jason, his girlfriend Debra (Michelle Morgan), their drunken professor Andrew Maxwell (Scott Wentworth) and a host of their friends and fellow film students, as they make their way across state to the 'safety' of their family homes. But is anywhere safe from this global pandemic? 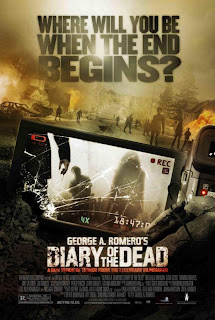 For a visionary director renowned for his groundbreaking concepts, it is initially disappointing to presume Diary's 'Point of View' technique is a bandwagon-jumping response to Matthew Reeve's handicam monster blockbuster Cloverfield, however this is not the case, and Diary's application of the technique is a platform for Romero to deliver a – rather heavy handed – comment on the 24/7 online community (who all strive for instant fame and information verification), and a warning of the disassociation of the lens; footage can be edited to tell (and cover up) any story and favour any party. It is telling that deaf and mute Amish farmer Samuel (R.D. Reid) – I told you it was heavy-handed – is just as clued up on the invasion as the internet-savvy students.

Despite rejigging the franchise's mythology, Diary's plot neatly progresses through a microcosm of each of the previous entries' key-themes and iconic scenes: from being holed up in Samuel's barn (Night), to spying a zombie pushing a shopping trolley (Dawn), to filling up on supplies in a renegade military unit's garage (Day), to discovering a swimming pool full of the living dead at wealthy friend Ridley's (Philip Riccio) parent's mansion (Land). And yet, as I have proven above, Diary is in no way a tired retread but a film which acknowledges its monstrous heritage and its legions of fans while bringing something new to a genre which has been shuffling around this earth since 1968.
CR@B Verdict:The concept is brave but the message is communicated rather heavy-handedly. In the Romero tradition, Diary of the Dead boasts scores of both literal and figurative brains, but it is the least successful of the series as a piece of horror entertainment.
***
Created by ~ CR@B Howard ~ at 07:39