Underland, Overland, Bonkers Are We 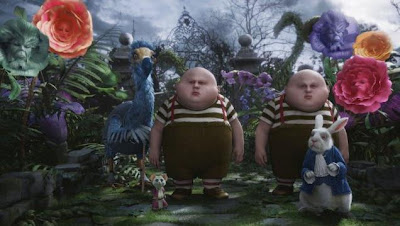 Is Tim Burton mad? Well, yes: totally frickin' off his rocker (have you *seen* Beetlejuice?! Well, watch it again!), but then all the best directors are. They're still only human, however, and occasionally prone to producing weaker entries in amongst the masterpieces which comprise their illustrious filmographies (have you *seen* Planet of the Apes?! Well, don't bother). It is with a heavy heart that I suggest that Edward Scissorhands's creator's reimagining of the Lewis Carroll fairytale (and classic Disney 'toon) Alice In Wonderland falls into this most feared camp.

19 year-old Alice Kingsleigh (Mia Wasikowska) is wistful, imaginative and takes after her deceased father (Marton Csokas); she clearly doesn’t fit in with the prim and proper society in which she lives. On the verge of an unwanted wedding proposal from snooty Lord Hamish (Leo Bill), Alice is distracted by a white rabbit in a waistcoat and proceeds to follow the well-dressed lagomorph down a rabbit hole – only to land in Wonderland- sorry, Underland, a garish and hallucinogenic world where the animals talk, dodos still exist and a civil war is raging between the beautiful White Queen (Anne Hathaway) and her volatile usurping sister, the Red Queen (Helena Bonham Carter, with digitally bloated bonce), with her army of playing card soldiers – a war which it is prophesised in a magical scroll Alice will end when she slays the Jabberwocky with the vorpal sword on the Frabbulous Day. Confused? Oh, you will be, as the bizarre character list escalates, the fabricated words get longer and the Underlandscape gets ever more curious and curiouser as Alice journey’s from castle to castle in the lead-up to the climatic battle… on a giant checkerboard.

Somebody fetch the aspirin... 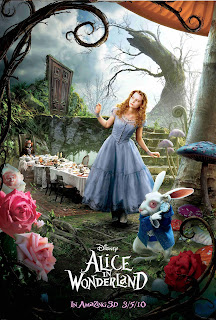 Returning victorious to the real world, Alice turns down Hamish and addresses the gathering crowd of spectators, before talking business with Hamish’s father and suggesting they open up shipping routes with other countries. Riiiiiight. As the credits roll, Alice is bound to set sail for China on a ship called “Wonder”. D’ya see what they did there?! It’s a cloyingly twee resolution which is meant to demonstrate how Alice has grown from her adventures yet is still her father’s daughter, but I found it jarringly unexpected and wholly dissatisfying, given how only the briefest indication of her father’s line of work was in the opening conversation of the film – nearly 2 hours previous.

Clearly, it's all about the detail. And on a positive note, the film's attention to detail is truly sublime (check out the digital particles of dust and dandelion seeds which could so easily have been left out of the crisp CG world) and all the trademark Burtonian motifs are in place – demented concept? Check; nightmarish angular-branched forest? Check; Johnny Depp acting his arse off? Check. However, the one ingredient the director’s latest gothic fairytale is missing is heart, and that Underland displays in wanton excess, thanks to the theme-obsessed Red Queen. Therein lies the film's problem: there is too much muchness, but no teeth behind its beautiful big grin. In other words: Alice is a wholly shallow experience. Much like the ocularly-impaired Bandersnatch, you'll leave the cinema with your eyes aching, while your head will be more occupied with trying to make sense of the bonkers lingo than emotionally satisfied with the film’s message-laden framework.


CR@B Verdict: Visually stupendous but utterly demented to the point of disassociation, and with a weak resolution to boot. Much like Avatar, Wonderland is still worth visiting – at least in 3D – alas, Alice is not one of Tim Burton's greatest works.
***
Created by ~ CR@B Howard ~ at 12:23