The Zombies are Revolting! 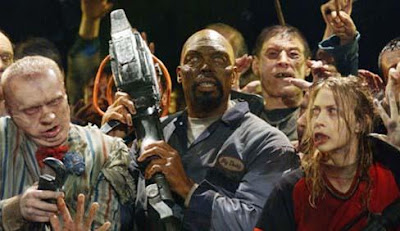 Two decades after the dead had their Day, legendary filmmaker George A. Romero returned to the series – and sub-genre – he created, with 2005’s Land of the Dead. Since the mysterious events first depicted in Night of the Living Dead (1968), civilisation has been obliterated by the reanimation of the recently deceased as flesh-eating zombies; America has become the land of the de-composing. In Pittsburgh, Pennsylvania, the living have been forced to survive in fenced-in slums while the upper classes feign ignorance of the zombie apocalypse in the sanctuary of Fiddler’s Green, a luxury apartment complex lorded over by elitist tycoon Kaufman (Dennis Hopper).

Kaufman also financed the construction of Dead Reckoning, an armoured artillery vehicle built by Riley Denbo (Simon Baker) and used by Riley and his team on reconnaissance and supplies missions. When Kaufman refuses cocksure dogsbody Cholo (John Leguizamo) residence at Fiddler’s Green, Cholo steals Dead Reckoning and threatens to fire on the high-rising haven if his $5million ransom isn’t met. Drafting in Riley – along with his burn-victim friend Charlie (Robert Joy), outcast Slack (Asia Argento) and a trio of military goons – to intersect Cholo and bring home his four-wheeled asset, Kaufman believes his troubles are over, however the “stenches” (as the dead are referred to) seem to be remembering aspects of their former lives – including how to use weaponry – and they are on the move… toward Fiddler’s Green.

Land of the Dead is chock full of blood, guts, carnage and a big dollop of trademark Romero commentary, this time attacking class society. Money has let Kaufman play God – but who is he to decide who is welcome into paradise? The real saviour of the story is honest, hard working Riley, but he is far too humble to take credit. The rich inside Fiddler's Green are as distracted by commodities as the dead are by “sky flowers” (fireworks), however the dead are advancing and becoming more resourceful than the unworldly, material-obsessed living, amassing an arsenal of weaponry and leaving a trail of bodies on their (literal and metaphoric) journey. To further the biblical allegory, the “stenches” don't need to part the waves to cross the water into the isolated city, in one of Land's grandest and most atmospheric scenes

As leader of the zombie revolt, “Big Daddy” (Eugene Clarke) is the evolution of the iconic “Bub” from Day of the Dead (1985), the zombie who showed the first signs of cerebral processes, and Land offers a plethora of other welcome call-backs to the preceding entries in the series: zombie effects supremo-cum-actor-cum-director Tom Savini, whose biker character was savagely killed in Dawn of the Dead (1978), is seen in zombie form; actress Asia Argento (Slack) is the daughter of Dario Argento, cult horror filmmaker in his own right and co-producer and co-composer of Dawn; while the story for Land was partly deprived from a unused plot for Day.

Land is the first of the living dead films to be shot digitally and feature CGI-effects (a few of which are jarringly noticeable alongside traditional methods), and there are other modern touches which make this twenty-first century outting distinctly of its time: a lesbian couple are pulled apart while snogging, a girl has her belly button ring bitten off, Simon Pegg and Edgar Wright of spoof/tribute Shawn of the Dead cameo for their idol, and all manner of technological gizmo's crop up in the plot (such as the computerised interior of the Dead Reckoning, not to mention the homing device it is fitted with), which causes something of a headache for the continuity-obsessed fan* and probably explains why George 'reset' the timeline with 2008's Diary entry.