The Quick and the Living Dead 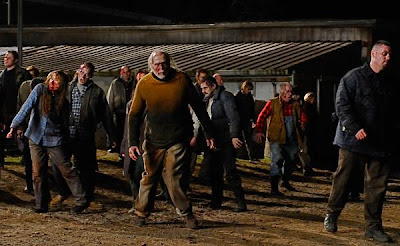 George A. Romero has never made films for the sake of it. Despite the huge success and cultural impact of his Living Dead series, he only ever got behind the camera when he had something to say. As the years shuffle by, cultures change and cracks appear - cracks Romero could mine for biting(!) social commentary. This is why there were 10, 7 and 20 year gaps, respectively, between Night, Dawn, Day and 2005's long-awaited comeback, Land. In contrast, the latest entry in his expansive zombieverse, Survival of the Dead, is the third film to be released since his return to the saga 5 years ago. The cynical would presume the iconic visionary is simply flogging a (living) dead horse – and the fact that Survival was released straight to barebones DVD (in the UK at least) would appear to support a theory of diminishing returns – but the truth is that Survival of the Dead is the most savage and entertaining entry in the series since Day. Clearly George simply has a lot to rant about twenty-first century culture. 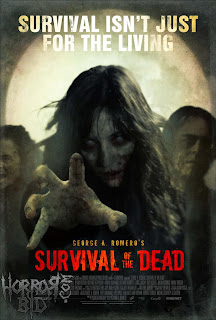 Survival is the closest Romero has come to a straight-up sequel, with Diary bit-parter Colonel “Nicotine” Crockett (Alan Van Sprang) of the renegade National Guard returning in the lead role. But that is as far as the Diary connection extends; the handicam technique is, thankfully, dispersed of, and a wholly independent story is told, with a distinct theme and allegorical message of its own. In the hope of finding a refuge from the flesh-eating menaces roaming the mainland, Crockett and his ragtag unit are lured to the remote Plum Island by exiled islander Patrick O'Flynn (Kenneth Welsh), only to find themselves embroiled in a Irish-American clan war between the O'Flynn's and the Muldoon family, who have very different opinions on how to take care of the zombie “curse”. Even in paradise, there is no escape from the dead – or the ignorant.

The zombie genre has forever raised questions about the divide between the living and the dead, but Survival draws on a myriad of battle lines: Old World vs. New World, Heaven vs. Hell, God vs. the Devil, good vs. evil, right vs. wrong, fathers vs. daughters, kin vs. strangers. Therefore it is somewhat appropriate that Survival is Diary's polar opposite, leaving behind the impersonal nature of the high-tech internet age to tell a more personal and traditional “no-tech” tale – replete with dominant Western theme, horse-riding and lassos – with a modern sting. Plum Island's self-referential 'Sheriff' Seamus Muldoon (Richard Fitzpatrick) is an old-fashioned man with outdated ideals and twisted values, who takes exception to the O'Flynn's shooting the dead, preferring to hold on to his departed by herding them like cattle, chaining them to their past lives (literally) and attempting to teach them to eat something which isn't human flesh. But can you teach an old zombie new tricks? 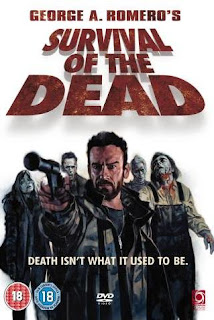 If I were to utter a minimal groan, the film does take its time to find its feet, the dialogue is occasionally inauthentic and some of the characters are rather loosely defined and unlikeable (in particular Athena Karkanis as blunt lesbian 'Tomboy', whose introductory scene is cringe-worthy), but once Crockett's team reach Plum Island, the film picks up momentum and gallops towards a climatic shoot-out between pea-shooters, machine guns and carnivorous teeth, which is an absolute hoot, displaying some of the most brutal and graphic zombie attacks I have ever seen. There is a large portion of quirky black humour, too, which, when the painfully obvious CG effects allow, is a raring success, and some of the most inventive ways to kill a “deadhead” (flare gun, fire extinguisher, branding iron through the- oh, I won't spoil it!!). Even after all these years of exterminating the deceased and shredding the zeitgeist, George A. Romero refuses to rest on his laurels, and Survival of the Dead is a surprising and audacious step towards a new dawn for his cannibalistic creations. I tip my Stetson to him.

CR@B Verdict: Gore, laughs, allegory, turf war, family drama and cowboys - Survival of the Dead has it all. True, it also has its flaws, but Romero has really pushed the ferry out with this bold and progressive entry in his iconic series. The Living Dead will never be the same again – and I cannot wait to see where he will take them next.
****
Created by ~ CR@B Howard ~ at 10:50