A Lesson in Children's TV History 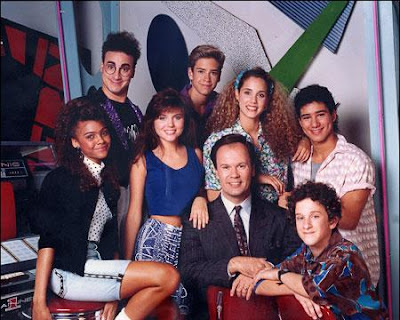 It can sometimes be a mistake to revisit your favourite programmes from childhood as an adult, as the years – and your maturity – may not be kind to what you once revered. Thankfully, this is not the case with High School comedy series Saved By The Bell, and I thoroughly enjoyed my reunion with the gang from Bayside School, California. It fact, it was amusing how strong some of my memories of the series were: I could still give a verbatim rendition of the pop-tastic theme song, and some of the episodes were as clear to me as if I had only seen them a week ago, rather than over 15 years.

This is not to say that I am blind to the shows flaws. As likeable as the characters are, they are unashamed, hyperbolic stereotypes: Zack Morris (Mark-Paul Gosselaar) is the cool rebel in permanent detention, Kelly Kapowski (Tiffani-Amber Thiessan) the pretty cheerleader of his dreams, Samuel “Screech” Powers (Dustin Diamond) is the robot-building, ant farm-keeping dweeb, perpetually rejected by socialite fashionista Lisa Turtle (Lark Voorhies). Jessie Spano (Elizabeth Berkley) is the straight-laced, politically-minded feminist at loggerheads with new kid on the block, hunky muscle-man “AC” Slater (Mario Lopez), who also puts a crimp in Zack's style by taking a liking to Kelly. A buddy rivalry is born.

While young-at-heart school principal Richard Belding (Dennis Haskins) is the only member of the Bayside faculty to be a main character, the 25-year-old me can now fully appreciate the humorous ticks and traits indebted to the other put-upon teaching staff: hard of hearing English Lit. professor and Shakespeare enthusiast Miss Simpson (Pamela Kosh), monotonous and dryly sarcastic mathematician Mr Dewey (Patrick Thomas O'Brien), fast-talking, pop quiz-obsessed Mr Testaverde (John Moschitta). Such quirky idiosyncrasies really help to flesh out these reoccurring bit-part players, even if the purpose is generally cheap gags.

Given its youthful and impressionable target market, Saved By The Bell is also guilty of not so much presenting its lessons in teen life, more wrestling you into a locker occupied by its clear-cut morals: pranks never succeed, bullies never prosper, geeks are humans, too (even if they are named Nerdstrom, Poindexter and Geekman – bit of a contradiction, there), and honesty and friendship should be upheld over greed and fame. It's mawkish, predictable stuff.

But if you can withstand the compulsion to groan, this late 80's kid-com is also something of a mould-breaker, at times it is way ahead of its time: Zack frequently breaks the forth wall to deliver narration, exposition or witticisms to the audience at home, occasionally calling a “time out” on the action to alter the continuity by moving people and objects, usually in his favour. As if he wasn't big-headed enough, he also gets to play God!! The pink-framed dream sequences are also impressively surreal – Slater dressed in a giant lizard costume handing out ironic punissssshments to his neglectful friends following the death of his pet reptile Archie, is by far the most trippy – showing the writers were capable of thinking outside the box while delivering regimented plots. 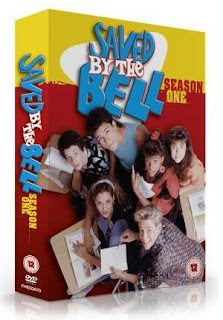 The best episodes – “Beauty and the Screech” and “The Election” – are those with the most emotional gravitas, the least successful - “Close Encounters of the Nerd Kind” and “Screech's Birthday” – are those that stretch credibility to snapping point in order to deliver a message. The pilot episode, “King of the Hill”, detailing the first day of High School and Slater's first day in a new town, is jarringly held back until 16th in the season with only a voice-over sentence from Zack indicating it as a flashback. I am not sure why this anachronism isn't remedied for this new release.

Curiously, this 2010 boxset comprises just 16 of the 20 Season One episodes, spread across 3 discs. Given the show's age, the picture quality is hardly great, and this set – episode synopses and stills gallery aside – is basically vanilla. But what irritates the most is that the Region 1 release from SEVEN years ago contains both Season One (complete) AND Two – and is available from Amazon Marketplace for half the price of this belated Region 2 rip-off.

CR@B Verdict: Blunt, predictable and groan-illicitingly moralistic, yet cheesy enough to still provide a guilty snigger. 20 years on, fashion and trends have changed dramatically, but teens are still teens and Saved By The Bell has seen off all imitators to its crown to still rule the school sitcom genre. Just import the bargain R1 collection instead.
***
Created by ~ CR@B Howard ~ at 09:21