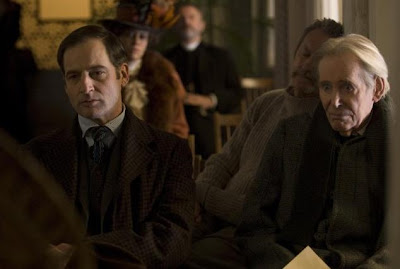 Having read Lord Dunsany's 1936 transmigatory novella prior to watching this recent celluloid translation, I was left wondering not only HOW it would be possible to film Dean Spanley, but also WHY anybody would want to, given the somewhat unconventional concept and the wholly limited narrative progression. It is with great relief that I inform you that Alan Sharp's screenplay – whilst being a faithful tribute to the book – expands greatly upon both the story and the characters to such an extent that it is a whole different beast – and all the better for it.

Most noticeably, the nameless scientific writer whose research comprises the novella, becomes Henslowe Fisk (Jeremy Northam), an art publisher who weekly visits his crotchety, emotionally-stunted father, Horatio (played with cantankerous delight by Peter O'Toole), who has been unable to show affection since his youngest son was killed in the Boer War. It is at a time-frittering lecture on the “Transmigration of Souls” given by Swarmi Nala Prash (a cameo by Art Malik) that the Fisk's first encounter the eponymous Tokay-obsessed Dean Spanley (Sam Neill), whose curious canine memories hold the key to unlock Fisk Snr.'s jaded heart.

Unlike his literary counterpart, Henslowe Fisk has no ulterior motive in inviting the Dean to dinner, merely a curiosity which, over time, becomes bemused intrigue. Thus, his luring of the Dean by procuring bottles of Imperial Tokay from 'conveyancer' Wrather (a smirk-inducing turn by Bryan Brown) is less deceitfully immoral and more amicably genuine – he isn't after fame, only interesting company. And then the Dean mentions something which makes him prick up his ears... 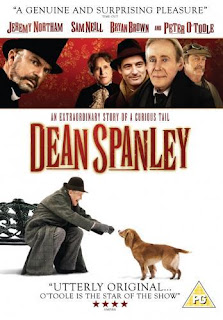 Peter O'Toole is undoubtedly the star of the show, in a role entirely created for the film. Whether blunt and unsympathetic (“Poppycock!”), engrossed and mournful or blabbering on about his beloved childhood spaniel, O'Toole breathes authenticity and life into Fisk Snr. with a truly multi-faceted performance. Sam Neill, too, is wonderful, being given the unenviable job of bringing credence and sensitivity to Walter Arthur Graham Spanley's wild stories. Are they real, or has the dog-collar gone to his head?

The film was by no means a runaway success upon release (even Lord Dansany's novella was out of print for 30 years before the film resurrected interest), yet somehow this adds to Dean Spanley's charm; it is a hidden gem barking to be heard. Quirky, funny, original and delightful without being unrelatably ludicrous; when the emotionally-invested narrative comes full circle, only the toughest of hearts won't melt. Much like the smell of wet fur, Dean Spanley's lessons on love, life and happiness will stay with you for days.

CR@B Verdict: Alan Sharp has taken the biscuit base of Lord Dansany's novella and added fine cuts of meaty emotion to the story to create a pedigree film which is anything but a dogs dinner.
****
Created by ~ CR@B Howard ~ at 13:59