The Price of the Night 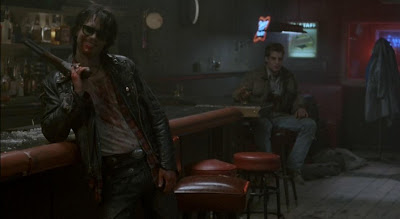 No disfigured foreheads, no beady feral eyes, no skin-piercing fangs, and – of note – not a single mention of the term “vampire”, but the ragtag gang of ageless outlaws at the centre of this scandalously underrated 80's horror-western are bloodsucking, neck-biting creatures of the night in all but name.

Released in the shadow of the more financially successful fellow cult vamp flick, The Lost Boys (1987), Near Dark tells the story of cowboy Caleb (Adrian Pasdar), who one lazy summer night becomes infatuated with the enchantingly mysterious out-of-towner Mae (Jenny Wright), who leaves him before daylight with one helluva hickey and a steadily-worsening sickness. Before he can stumble home, Caleb is kidnapped by Mae's drifter 'family' – comprising father-figure Jesse (Lance Hendriksen), his woman Diamondback (Jenette Goldstein), cruel bastard Severen (Bill Paxton) and aged 'kid' Homer* (Joshua Miller) – who bungle him into their camper van and reluctantly teach him how to survive in his reborn state. Meanwhile, Caleb's father, Loy (Tim Thomerson), and sister, Sarah (Marcie Leeds), set off across Texas to track down their missing kin – but which family will Caleb stay loyal to?

Two decades before she became the first female to win the “Best Director” Oscar for The Hurt Locker (2008), Near Dark was a very early gig for co-writer and director Kathryn Bigelow, but this is not to say it is a lesser work of an off-peak auteur. The film's simple, linear story is enriched with lush, reflective visuals and a brooding atmosphere. It's a first class product which delivers from the allusive opening mosquito bite to the taut and explosive final twilight showdown. Ye-haw! 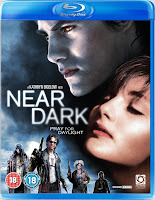 When violence and gore are used, they are used brutally and they shock: skin chars, spurs slit and knives enter mouths. The set piece in which the beastly pack gatecrash a backwater bar is an unnerving and, frankly, uncomfortable watch as the unwelcome guests terrorise the petrified clientèle for sheer kicks. Their detachment to the savagery they inflict is chilling; Jesse smirks bemusedly while Homer sings along to the Jukebox! Fundamentally, they are bored, and I believe this intrinsic attitude is what gives the film its slow-burn pace: these immortals are in no rush because they have forever to play the fool and drink deep from the neck of life's hedonistic sins. Provided it's after dark.