A Mad Man With A Box 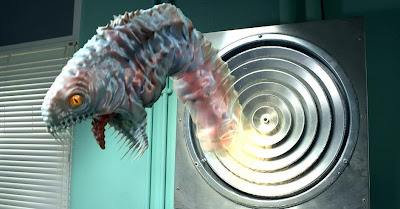 I have always liked the so-called “new Who” (AKA the Eccleston and Tennant eras), not to the extent that I would record it if I was out, but it always provided good, light-hearted (if occasionally too light) family entertainment on a Saturday teatime. With the dawn of a new Matt Smith-shaped era – and with a new showrunner at the helm following Russell T. Davis's departure – I sat down to watch with great expectations (after all, it's been kinda hard to escape the BBC hype machine in recent weeks); and it's fair to say Stephen Moffat delivered with a superb and dizzying debut.

New showrunner. New Time Lord. New Assistant. New TARDIS. New Sonic Screwdriver – and before the poor Doctor (Matt Smith) has time to adjust to his eleventh regeneration, he crash lands on Earth and has just 20 minutes to defeat a new alien enemy. Well, at least the iconic theme tune is the same – oh, no, wait: that's newly remixed too. Talk about a new brush sweeping clean... and yet, “The Eleventh Hour” wasn't inaccessibly innovative – it was glossier, edgier and had a distinctly more filmic quality (from the – mostly – impressive CG effects to the more dramatic musical score), but it was still comfortingly familiar.

Although he has been on board the show for some time now, Stephen Moffat was clearly out to make a bold first impression in his new head position – “The Eleventh Hour” was Doctor Who Plus: more emotional, more touching, funnier, sexier, scarier and edgier than the previous (and hugely popular) incarnation – but without David Tennant's popularity to fall back on. From the dramatic, flame-hindered TARDIS free-falling across the London night sky to the Piranha-esque "Prisoner Zero" with the ability to take the form of any being it links with psychically, tonight's series opener was an epic thrill-ride. 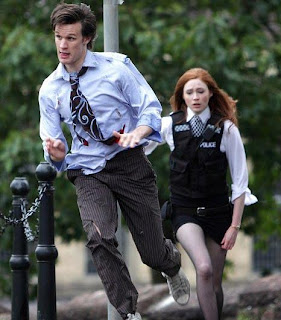 Based on this first performance, Smith looks set to make the revered role his own with an enjoyably quirky performance (fish fingers and custard!!) packed with humour and a uniquely gawkish quality - yet he was definitely still in control and not out of his depth. His new assistant, feisty Scot Amy Pond (Karen Gillan), certainly made an immediate impact brandishing a cricket bat and wearing a sexy policewoman's kiss-o-gram outfit (see pic, left), but she has a cute, vulnerable quality given her sentimental back story. For Amelia (to give her her birth name) first met the Doctor aged 7 (and played by Caitlin Blackwood) when, immediately following his regeneration, he crashed into her back garden somewhat confused and hungry for apples... this had a severe impact upon the young orphan's life – the Doctor promised to return in 5 minutes but doesn't return for 12 years*, in which time Amy has had to see four psychiatrists to get over her 'imaginary' friend, the “Raggedy Doctor”...

I felt the plot – involving the escaped "Prisoner Zero" being tracked by intergalactic 'police' known as the Atraxi (giant eyeballs) – got a little confusing at times, as decisions were made and people were rushing this way and that in the blink of a (giant) eye. Furthermore, the scientific mumbo-jumbo was babbled at break-neck speed (particularly while the Doctor was borrowing a man's laptop to piggyback on a worldwide phone call to Patrick Moore!!), yet the outcome was predictably simple: the Atraxi left Earth when they realised Smith was the Doctor. Okay, point made: he's back, with a younger face and a bow tie, but he's still fearsome, even to giant eyeballs with the power to incinerate the globe!! Riiiiight... But then plot, logic and reason are really of secondary importance on Doctor Who, and as a piece of fantasy entertainment “The Eleventh Hour” was first rate.