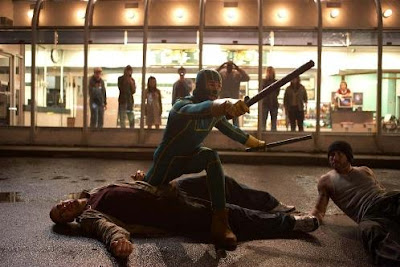 The problem with hyped-up, word-of-mouth movies is that if you don't “get” what all the fuss is about, you start to question yourself: "What am I missing?" "What is everybody else going gaga over?" "Should I give it a second viewing?" "How does it deserve 5 stars?!!" These are some of the questions plaguing me since watching Kick-Ass, the bold new 'superzero' adaptation from Jane Goldman and Matthew Vaughn, the writer and director duo behind Stardust, which is receiving almost unanimous rave reviews from critics and cinema-goers alike.
For those critics and cinema-goers, the following will be a controversial read...
Dave Lizewski (Aaron Johnston) is just your everyday Peter Parker-esque high school student: he's a scrawny guy who flails when talking to the opposite sex – including the “Mary Jane” of the piece, Katie Deauxma (Desperate Housewives' Lyndsy Fonseca) – and spends his evenings online working his way through a pack of Kleenex... until he and his equally geeky classmates Marty (Clarke Duke) and Todd (Evan Peters) are mugged for the nth time and Dave dons a web-bought scuba suit to become... Kick Ass, who, most of the time, ends up getting his ass kicked and his chest stabbed (yeah, I was shocked, too), leaving him with shredded nerve endings and a higher tolerance for pain. 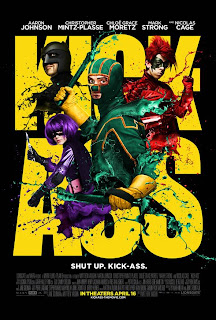 As you can see, there is a LOT going on in Kick-Ass, all of it very in-your-face, and sometimes characters and plot strands are off-screen and almost out of your memory for large chunks of the film: Marty, Todd and Katie in particular. The major issue I had with the film was there were just too many juxtaposing styles clashing awkwardly: high school humour, teen romance, superhero pastiche, comic book fantasy, gangster torture thriller, gore-soaked beat 'em up. It's fun, granted, but what is 'it' supposed to be? The film's selling point is that these are normal people playing dress up, so why does it cross over into hyper-silly fantasy with rocket powered jet packs, skyscraper damaging bazookas and walk-in microwaves?!

Kudos to Goldman and Vaughn for a complete departure from their 2007 Neil Gaiman adap to bring something new and striking to the well-worn superhero genre; Kick-Ass is everything but half-assed (*guffaw*) – and that is the problem: The violence is shockingly brutal, the gore slopped about in abundance, the language foul and the humour snigger-some. Quite how this wasn't rated '18' I will never know... It's extreme, dizzying and totally unrelenting, and with such a mixed bag you're bound to taste some flavours you want to spit out.


CR@B Verdict: Mix Watchmen's level of bloody violence, Kill Bill's stylistic idiosyncrasies, Spiderman's amiability, The Dark Knight's action and Superbad's high school humour and you have yourself a Kick-Ass cocktail. It's a potent concoction which would have gone down smoother as individual shots.
***
Created by ~ CR@B Howard ~ at 14:17