Cause And Special Effects 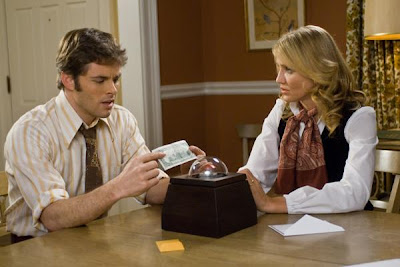 So now we come to his latest attempt to confound, mystify and enlighten audiences: The Box, based on a short story from I Am Legend scribe Richard Mattheson. Dubiously, I decided to give it a go… Set in 1976, high school teacher Norma Lewis (Cameron Diaz) and her NASA optics engineer husband Arthur (James Marsden) are chosen by the mysterious lightening-disfigured Arlington Steward (Frank Langella) to take a morally questionable test based around the titular MacGuffin: you have 24 hours to decide whether to push the button, or not. If you do, you will receive $1million dollars (woo). However, somebody you don’t know will die (boo).

What would YOU do? 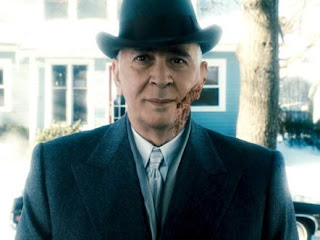 For the first hour of its 115minute running time, The Box was a taught, tense and credibly atmospheric drama probing human morals, greed, suspicion and paranoia – with a genuinely creepy edge. It’s hardly a spoiler for me to tell you that Norma does push the button, a decision both she and Arthur instantly regret. Indeed, their “winnings” are locking in the basement and barely given another thought. Arlington (see pic, above) accrues the mystery by refusing to answer questions about his shady and immoral test, but knowing far more than a human ever could – and he seems to have mumbling, bleary-eyed “employees” everywhere... 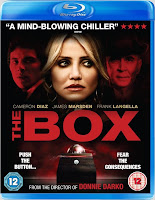 The film takes itself very seriously, and the cast play everything inflexibly straight, even as we pass the hour mark and things take a bizarre supernatural turn which threatens to derail the impressive first half. It brought to mind the genre-swapping shift midway through From Dusk Til Dawn (1996), only far, far less successful. Creepy gives way to kooky, especially when a visit to the library offers up a further test for Arthur in the form of three Stargate-esque portals, one of which offers him salvation yet leaves him floating above Norma in their bedroom, cocooned in a cube of dubiously CGI-ed water(!!).

Somehow, someway, following ethereal revelations, shootings and a kidnapping, the film eventually comes full circle, ending with god-wannabe Arlington making Arthur choose between his wife’s life and his son, Walter‘s (Sam Oz Stone), health, before the Two Face-channelling obscurity heads down the street to give another couple The Box…

Maybe the book made more sense?!


CR@B Verdict: Neither a Darko-dimensioned delight, nor a Southland-shaped shambles, The Box starts out as a tense psychological chiller before showing its true (shark-jumping) sci-fi hue. A curious and peculiar piece which may benefit from a repeat viewing – or locking away in the basement… What would YOU do?
**.5
Created by ~ CR@B Howard ~ at 09:26