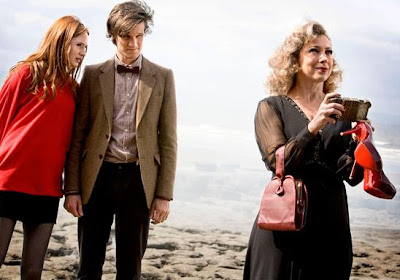 [“SPOILERS!”] It is reasonable to declare that this hotly-anticipated new era of Doctor Who has received a somewhat inconsistent response to its first 3 adventures. Is Matt Smith’s Doctor eccentric or clumsy? Is Karen Gillan’s Amy Pond cocky or candid? Is the crack motif clever or unsubtle? Are the myriad of aesthetic changes necessary or indulgent? And who the hell remixed the iconic theme music?! While the general consensus is generally weighing towards the positive, critics cannot decide which of the new instalments most demands a rewatch or a switch off. With “The Time of Angels”, however, I think even the most affronted of die Who-ds can put down their burning effigies of the Mighty Morphin’ Power Daleks and agree that the Stephen Moffat reinvention has found its form, and at its peak, is bloody brilliant Saturday night entertainment. Huzzah!

As more of a general viewer than a dedicated Who fanatic (though admittedly no less judgemental), I was thankful for new recruit Amy’s inquisitive probing of returning enigma and vivacious time-traveller River Song (Alex Kingston), who I must admit to not remembering from her previous appearance alongside David Tennant's Doctor in “Forest of the Dead” (2008). Maybe I was out that night? Regardless, the plucky professor certainly made an impact in this episode, with her bullish charm and emasculating effect over the Doctor, particularly when driving his TARDIS and pointing out his mistake of leaving the handbrake on!!

Conversely, the unseen seekers the Weeping Angels required no re-introduction, as their unveiling in the Moffat-penned “Blink” (2007) has etched the statue-esque horrors in my mind as one of the deadliest, scariest and most memorable enemies in one of – if not the – best episode of Doctor Who in recent memory. This sort-of-sequel may not quite have been the flawless masterpiece of their debut, but it was darn close and by no means an illustration of diminishing returns.

Having made a (time) co-ordinated pick-up of River Song from the other side of a 12,000 year gap, the TARDIS-travelling trio were hot on the tail of the spacecraft Byzantium as it crash-landed on a desert world and revealed that the last of the Weeping Angels was hidden like a “hay-like needle of death in a haystack of… statues” (this gem of dialogue was courtesy of the on-form Doctor) in the Maze of the Dead, an ominous and atmospheric temple hidden beneath the earth. So began an Aliens-like hunt through the caverns, accompanied by the future of the Church; an elite team of gun-toting clerical commandos lead by Bishop (Iain Glen). 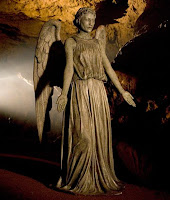 “The Time of Angels” really was an episode of two halves (and in itself is only the first half of an epic two-parter), with the opening quarter of an hour dedicated to River Song’s exhilarating return before the bubbly, banter-laden tone shifted to a darker shade of tense with Amy getting locked inside a trailer with a Weeping Angel materializing out of the CCTV screen in a nod to The Ring, and the Doctor’s belated realisation that the myriad of deteriorating statues littering the underground grotto were also dying Angels hoping to steal the images of the human team, ratcheting up the feeling of dread by some degree.

As I alluded to in the opening paragraph, public perception is divided over the youthful new teaming of Smith and Gillan, but I for one really like their friendly, teasing repartee which sparkles with witty dialogue: “Do I look that clingy?!” pops Amy after the Doctor suggests she looked deep into the Angel’s eyes. This winning formula was accentuated in this latest instalment by the effervescent River, who also packed a verbal punch. “River, hug Amy,” requested the Doctor. “Why?” asked the professor. “Cos I’m busy,” being but one smirk-worthy example in a vibrant, well-written script.

Yet it wasn’t only laughs which made “The Time of Angels” a superior outing: this was family entertainment which wasn’t afraid to scare; the budget was used spectacularly to give a visual veneer far above the BBC’s usual sound-stage standards; and commando Bob’s (David Atkins) chilling monotone delivery as he revealed his demise at the hands of the image-stealing statues was genuinely unsettling.

A stone cold classic? Well, we're only half way through the story and it is shaping up to be a monumentous escapade. I cannot wait for next week’s conclusion.


CR@B Verdict: Witty, creepy, tense and packed with action, “The Time of Angels” was an atmospheric delight with a genuine filmic quality which has carved out a new benchmark for Moffat's rejuvinated era.
****.5
Created by ~ CR@B Howard ~ at 09:33