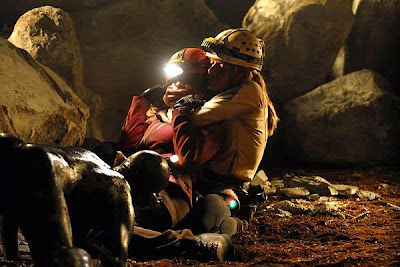 A belated sequel without the mastermind of the successful and decidedly free-standing original at the helm is usually the sign of a cheap DTV cash-in which is best avoided. Think Scorpion King 2: Rise of a Warrior. Shudder. However, The Descent: Part 2 generated healthy reviews upon its cinema release in December, and with Neil Marshall still on board (albeit only in the reduced role of executive producer), I decided to give this return underground a chance, despite the seemingly conclusive end to the original.

Part 2 picks up where the alternate (and moderately less depressing) US edit of The Descent (2005) left off, with lone survivor Sarah (Shauna McDonald) – who perished in the original UK version – back above ground and rambling towards a passing car. Unstable and near-mute from shock, she is soon forced by bull-headed town Sheriff Vaines (Gavan O'Herlihy) to leave hospital and return to the caves she has just barely escaped from, to help locate the five other missing girls who made up her tragic team. It's a dubious moral decision born out of desperation which feels like a slightly contrived way to shoehorn in a returning character for maximum screen time, but once the ragtag search and rescue team (of varying cave-diving experience) are below surface, this is by-the-by.

As Sarah's repressed memories of her horrific time in the caves return via interlaced snapshots from Neil Marshall's film, you begin to realise how dependant upon every aspect of the original this follow up is. This is not to say Part 2 offers no fresh twists or shocks, because it does (Crawler crapper!! Surprise saviour!!), but why bother making a new chapter if you need to mine the first so frequently? The only instance in which this works to the new film's advantage is in the introduction of the hideous, mutated Crawlers, which smartly mirrors similar footage the team have just discovered on a discarded camcorder.

Given the tight angles and shadowy hue of the underground locale, the horror is fairly intense and the gore is effectively visceral (a personal highlight is watching a rat force its way out of the mouth of one of the deceased original team, her body open and gutted) and at times cringingly uncomfortable (“Just cut him!”) as the rescue team gets ever smaller. It is ironic that the blind, Nosferatu-like creatures seem to have a predilection for human necks – I wonder if this was a purposeful reference to a classic light-adverse blood guzzler?

As the film winds on, Sheriff Vaines descends into an arrogant and thoroughly dislikeable character, making a host of rash, stupid decisions, from unholstering his gun in the unstable structure to unnecessarily employing his handcuffs despite the obvious need to, err, climb. Once a Sheriff, always a Sheriff, clearly... However, the only truly damaging misstep in this above average sequel occurs mere seconds from the closing credits, and it appears to defy logic. But, hey, you gotta give the fanboys something to moan about – and the rationalising theories are already in full swing on imdb.com!

CR@B Verdict: Creepy, gritty and claustrophobic, if a little over-reliant on its superior predecessor. The Descent: Part 2 is a decent horror which only really stutters in the closing moments with an unexpected and random twist.
***.5
Created by ~ CR@B Howard ~ at 16:32