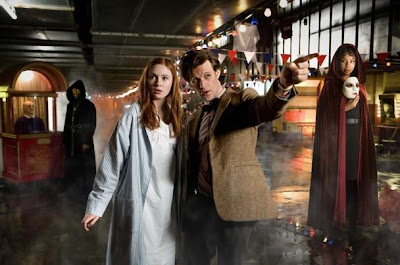 Oh dear. Oh dear, oh dear... after last week's high-flying Moffat/Smith era opener, last night's sophomore episode came crashing down as a great disappointment in ALL areas, which is ironic given that “The Eleventh Hour” was grounded on 21st century Earth, while “The Beast Below” took us on a journey to the stars aboard the 29th century Starship UK; a police state comprising all of England's towns and cities aboard one flying landmass. The country's children are upset, creepy rotating clown-headed “Smilers” (see pic, below) sit in decaying Fairground booths passing judgement on the masses while piping a live feed through to Big Brother, and the gigantic ship's engines aren't making the water vibrate. Hmmmm, can somebody call the Doctor (Matt Smith), or, better yet: a science fiction and fantasy film buff...

I was instantly and continually troubled by the episode's truly unoriginal patchwork plot: from the Discworld-esque locale and Mort-dressed surveillance Minders, to the grimmy Blade Runner aesthetic of the post-apocalyptic environ, not to mention numerous cringeworthy Hitchhikers Guide To The Galaxy (Amy in her nightgown for the entire episode) and Star Wars (“My only hope”; garbage chute) references. In short, there was not a single innovative theme, character or device in the entire hectic 45 minutes. But it wasn't only classic genre pieces that Moffat borrowed from: modern science-fiction was also mined in the form of Lost-like video diaries as evidence of the hidden truth behind Starship UK's engine-less flight, and a Protest/Forget button in the Voting Booth somewhat simplifying the red-pill/blue-pill quandary facing Neo in The Matrix. 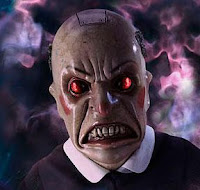 I wish I had been able to chose 'Forget' and erase any memory of this below-par adventure, especially when the gothic-gowned Phantom of the Opera impersonator trailing the Doctor turned out to be Liz Ten (Sophie Okonedo), the future Queen of England (with the most annoying “common” accent ever: “I'm the bloody Queen, mate. Basically, I rule.” *cringe*) who has been kept in the dark about the horrific and inhumane truth behind her country's Pratchett-plagiarising propulsion practises, pushing the episode's primary concern over the children's safety to the background for far too long (while Hannah Sharp's schoolgirl Mandy stood around idle yet still in shot).

Furthermore, I can't say I was overly taken by Matt Smith's portrayal of the Doctor this week; he is clearly comfortable in the role but I found myself getting more and more exasperated by his increasingly kooky asides and scatty persona, which failed to make me smile like Tennant used to. It also seems like more of an act, given how ridiculously well-informed he truly is. You may feel I am being overly hard on “The Beast Below”, so I will leave you on a positive note (yes, there is one); the plot climaxed with an emotional intensity which really helped bond the Doctor and his new assistant, as Amy Pond (Karen Gillan) saved the day by making a parallel to the immortal Doctor's loneliness. It was a mature and well acted scene, if only Moffat didn't feel the need to drive the message home by repeating it nearly word-for-word in the star-gazing epilogue, akin to the way the early Harry Potter films spelt out EVERYTHING to aid the youthful demographic.


CR@B Verdict: A hackneyed dud worryingly early on in the new series, the only bright lights being an emotional intensity to the climax and a number of subtle callbacks (Magpie Electricals) and references (like on Amelia's wall, a crack appears on the side of Starship UK) to keep the loyal fanbase content. A prime example of Who trying too hard.
**
Created by ~ CR@B Howard ~ at 08:58