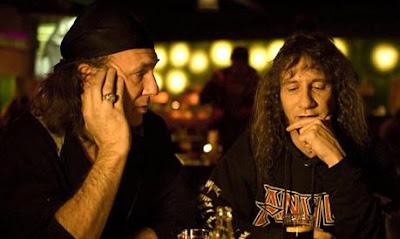 I am not a fan of Heavy Metal music, therefore it is no surprise that before watching this film I had never heard of the band Anvil. I have since learnt that the “demi-gods of Canadian Metal” (as a die-hard fan dubs them in the film) were instrumental in the early 1980's for establishing the scene bands such as Metallica, Guns & Roses and Bon Jovi would go on to thrive in and conquer, while Anvil faded into obscurity, no more than a footnote in musical history.

Which begs the obvious question: why should we care now, 30 years and 12 unsuccessful albums after “Metal on Metal” (1982), their biggest hit? This no-thrills documentary opens with a smattering of famous talking heads (Slash and Motorhead's Lemmy being the two biggest names) citing Anvil as a massive and timeless inspiration. Well, obviously they would, they're getting paid by the producers to big these guys up, but as the camera's are switched on and director Sacha Gervasi trails the ageing rockers as they endure the hardships of a career in music once the spotlight has long since faded, you really start to rally for these passionate and determined underdogs. Even after a sprightly 81 minutes, Anvil! The Story of Anvil (2008) will leave you in nothing but full support of the band come the end credits.

You feel the manager-less foursome's pain as they play their hearts out to a handful of uninterested punters in a grubby pub in Prague, only to be told at the end of the night that they won't be paid because they got lost on their way and were a little late to the venue. Alongside working unglamorous 9-to-5 jobs, frontman Steve “Lips” Kudlow and co-founder/lifelong best friend/drummer Robb Reiner – no, not he from This Is Spinal Tap (1984), although you'd sometimes be forgiven the cringeworthy comparison to the calamitous faux rockumentary – toil relentlessly, frequently falling out, coming to blows or on the brink of tears, sacrificing so much for their love of the art and faith in their material.

Some (cynical) observers may say the washed up has beens are deluded for thinking a global company such as EMI Music Group are going to even think twice about distributing their 13th album, This Is Thirteen (2007), yet it is compelling to watch these sincere and likeable guys chase the dream. You really do fight alongside them on their rollercoaster ride, but the small victories bring about the biggest smiles. I sincerely wish Anvil all the best in bringing their music to the people: I hope this film has generated the recognition they duly deserve.