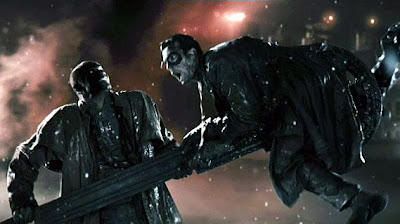 Following the runaway success of the stylised punk noir of Sin City (2005) and the gritty macho force of 300 (2007), you would be forgiven for thinking Frank Miller, creator of the comic books upon which the aforementioned films were based and co-director of the former, could do no wrong. Then, however, he decided to take somebody else’s line-drawn superhero creation and desecrate any originality by stamping his signature limited-palette stamp all over a celluloid adaptation.

Visually, The Spirit craves to be Sin City 2, if Miller ploughed ahead with a Robert Rodriguez-less, muted, family affair lacking in quality, edge and, well, spirit. It’s the film of a graphic novel, minus the graphic, attempting to win audiences over as an outlandish, tongue-in-cheek genre parody (character names Sand Saref and Plaster of Paris speak for themselves), yet for all of its ‘witty’ dialogue, flamboyant ‘flair’ and flashes of deliberately hammy spoofery, it takes itself far too seriously to succeed.

The minimal plot concerns murdered cop Denny Colt (Gabriel Macht; unendearing) who is brought back to life with the power to take a beating and heal at superhuman speed. Donning a face mask, black shirt and ‘iconic’ red tie, Colt becomes the eponymous Spirit, who keeps his beloved Central City safe from crime and flamboyant madmen such as his arch-enemy, the Octopus (Samuel L. Jackson), who is also imbued with this inflated tolerance of bodily torture and, for reasons unknown, will not shut up about eggs (!!).

Also on the green screen scene is Denny's childhood crush, the sexy, diamond-lover San Serif (Eva Mendes), who is on the hunt for the mythological Golden Fleece, unaware that her beloved bling is in an identical chest to the Octopus's desired treasure: the Blood of Hercules, which would extend his indestructibility towards demi-god status. What are the chances?! Quite high, apparently, as they are both found – chained together – at the bottom of a sewage plant swamp, and each party is enraged to have gone away with the wrong prized procession.

Isn't that always the way?!!

It's a farcical plot seemingly derived from a 1950’s Looney Tunes vignette, but without the laughs. This isn't through lack of trying, however: the Spirit and the Octopus trade heavy blows throwing in everything including the kitchen sink; the Spirit falls from a skyscraper only to get his trouser waistband caught on a gargoyles head in line with a lift full of giggling girls; the Octopus dabbles with cloning and creates a bouncing foot with a human head.... Frankly, it's cheap and groan-worthy balderdash.

The film's supporters – I'm sure there are some, somewhere – will argue that this is precisely the point, that Frank Miller wanted to create a self-aware piss-take of the overblown, ostentatious comic book superhero movie. Yet, while there are suggestions of such ‘ironic’ humour – the Octopus's army of dumb and defective cloned cannon fodder (all played by Louis Lombardi); the Octopus and Silken Floss (Scarlett Johansson) playing Nazi dress up to deliver long-winded exposition to the captive hero – ultimately, The Spirit falls far from the mark. It's a rambling and directionless mess of an adaptation, filled with flaws – Jamie Foxx's confusing and unexplained appearances as Spirit-saving goddess (?) Lorelei Rox, for example – which you're laughing at, not with.

Nobody is going to persuade me that Frank Miller purposefully made a shit film.


CR@B Verdict: A sad and sorry slurry of recycled style over sub-par substance: The Spirit is bombastic dreck which should never have been brought back to life in this form. Avoid.
*
Created by ~ CR@B Howard ~ at 09:26