Boys and their Toys 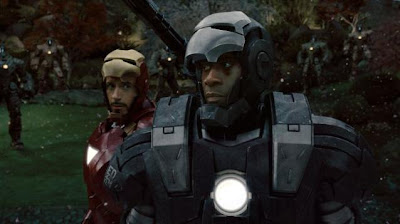 After a bleak and washed-out Russia-set prologue establishes the theme of fatherly vengeance fuelling physicist Ivan Vanko's (Mickey Rourke) violent motives for becoming electric-harnessing foe Whiplash, Jon Favereau's superhero sequel swiftly shifts gear into a totally different animal for the remainder of its two hour running time, hiding any sense of darkness under a bright and polished shell. Which, as it happens, is also a fair assessment of how we find billionaire man-behind-the-iron-mask Tony Stark (Robert Downey Jr.) as he opens the “Stark Expo”, a year-long technological showcase, amid a blaze of fireworks and cheerleaders; fearful for his survival as the power source keeping his heart beating is slowly poisoning his body, yet all smiles, peace signs and self-assured sarcasm as the poster boy for America's peace: Iron Man.

Unfortunately, everybody isn't quite so in love with Stark as he is with himself: the Government – spearheaded by hot-headed Senator Stern (Garry Shandling) – is determined to take control of Stark's “weapon” for military use, while shameless rival Justin Hammer (Sam Rockwell) has tenacious plans to upstage the techno-suit and stick two fingers up at Stark by unveiling his own drone-like creations (think beefed-up Super Battle Droids from the Star Wars prequels) at the Expo, by any underhanded means necessary. Being the top dog is really important to these people.

Friend Jim Rhodes (Don Cheadle, replacing Terrence Howard from the first film) isn't always successful in keeping Stark's head in the game – or clear of alcohol – as Tony names former personal assistant Pepper Potts (Gwyneth Paltrow) CEO of his company, then slowly goes off the rails towards self destruction. A riotous sequence as Rhodes dons his War Machine suit to butt heads with his drunken pal following a disastrous birthday party is a highlight in an otherwise talk-heavy, preparatory middle section as Tony returns to his Minority Report-style lab to battle with the elements and revitalise his uncooperative chest reactor, while Hammer secretly hires the scientific services of a scheming Vanko to mobilize his drone army for a flashy, high-flying conclusion.

The A-list cast are superb at putting the comic in this comic book adaptation; Downey Jr. emanates suit-ably elevated ego, while man mountain Rourke is a believably unpredictable threat and Rockwell is as shady as he is scatty. Scarlett Johansson smoulders as the secretary SHIELDing a secret identity, and even Favereau's chauffeur character, Happy Hogan, is a chucklesome success in an expanded role which sees his boxing training come in handy.

Beyond the buzzing banter, however, the explosive Monaco set-piece early in the plot is never bettered for sheer nail-biting tension, despite the filmmakers employing the 'bigger is better' approach to this entertaining CGI extravaganza. The busy finale ultimately wastes Whiplash's accumulated ferocity in an all-too-brief battle. When all is said, done and blown to smithereens, this big-budget follow-up boils down to a bunch of emasculated men vying to topple a superhuman idol in their magnificent flying (war) machines. Some things never change, no matter how much cash you flash. Question is, who's got the biggest... rocket?