Another Bite at the Zombie 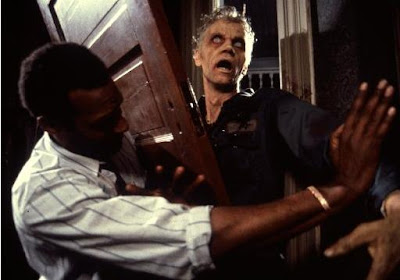 Given the recent slew of ostentatious horror remakes of questionable necessity and debatable quality (Nightmare on Elm Street , Psycho, The Hitcher, My Bloody Valentine 3D, Prom Night – need I go on?), it is understandable that you would approach any modernization of a genre classic with great trepidation. Nonetheless, this early ‘90s adaptation of George A. Romero's hallowed Night of the Living Dead is certainly not to be groaned at, granting a modern audience who would have scoffed at the black and white, budget-conscious 1968 effects a reason to look over their shoulder as they visit the cemetery; they’re coming to get yooouuu, Generation X-Box!

Obviously, Night 1990 isn't in the same groundbreaking league as the archetypal original with which it shares its name, but it is still a spirited and claustrophobically chilling triumph. Tellingly, the remake wasn't a studio-enforced cash-in on the cult zombie brand, but had the full backing of the “Grandfather of the Dead”. Indeed, Romero co-produced and rewrote the script he originally worked on over two decades earlier with John Russo, while effects supremo Tom Savini – having previously lent his gory stylisation to Dawn... (1979) and Day of the Dead (1985), to much acclaim – got the chance to complete the trilogy (ish), and was even handed directing duties. Additionally, Romero roped in a lot of the team who helped him realise his 1968 vision to recapture the magic all over again.

The plot, for the most part, sticks to the original’s winningly simple outline: a small group of strangers hole up in a backwater Pennsylvanian dwelling to survive a paranormal onslaught as the recently deceased rise from the grave and go on an insatiable hunt for human flesh. More credible and repugnantly gory make-up aside, where Night 1990 differs most apparently is in the characterisation, particularly that of lead female Barbara (Patricia Babylon 5 Tallman), who was criticised in the original for being rather, well, useless (the shock of the supernatural scenario sends her into a state of shock for 90% of the film, which, apparently is sexist and demeaning to females everywhere). This time around she is a more proactive and dynamic heroine who is handier with a gun and more forthright.

A further derivation from its source material is the morning-after epilogue, which substitutes the genuine controversy of having survivor Ben (now played by Tony Candyman Todd) mistaken for a zombie and shot down by trigger-happy yokels,* for enforced ‘shock’. Returning to the house of horror, Barbara murders self-centred survivor and all-round arsehole Harry Cooper (Tom Towles) as he climbs down from his private attic hideaway, before informing the hicks “Here’s another one for the fire”. Now, don’t get me wrong, the man was a belligerent, wife-beating, unsupportive monster who definitely had it coming, but for Barbara to murder a human so callously seems somewhat out of character. I mean, there’s forthright, and there’s forthright! But, hey, I guess a night battling the Living Dead is somewhat disillusioning to a person’s sense of morality, and who am I to judge until I have been in her position?